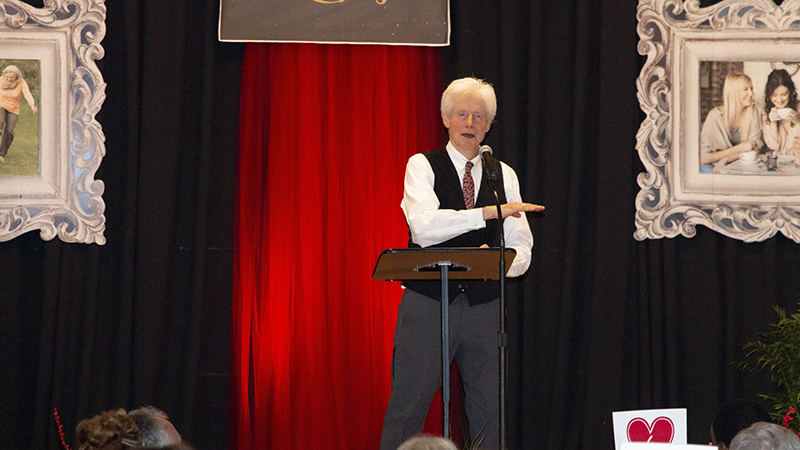 A sea of red filled the Callaway Conference Center Thursday afternoon for the 13th annual Heart Truth for Women luncheon.

LaGrange’s very own Emmy award-winning storyteller, actor and entertainer Fred Newman took the stage to talk about how the sense of sound changes his life, and to give the personal viewpoint of his own, personal cardiac event.

Newman grew up in LaGrange developing himself as an actor, writer musician, composer and sound personality for radio, television and film.

Newman went on to tell multiple stories about his childhood and how he learned the art of sound after struggling with the reading disability dyslexia.

“I didn’t know at the time but I was very dyslexic,” Newman said. “I began to see words as pictures … I am very present tense. Music and sound are linear, visuals are not. Sound made sense to me.”

Newman said there is power that comes with storytelling. He referenced a time in the early 60s on Red Line Alley in LaGrange.

“Martin Luther King is marching, and I am hearing stories from blacks and whites sitting in that place,” Newman said. “The color of your skin did not matter. If you’re telling a story, people would stop. The power of storytelling is extraordinary.”

Newman would go out and sit on a Coke box and listen to people tell stories.

Newman looked at the crowd and said, “see your sitting here, and tolerating it [his story].” \

Approximately 20 years ago is when Newman experienced his cardiac “event.”

“I had been [on a] plant based diet, exercising, all the good stuff,” Newman said. “… I finished the season of Prairie Home. I was on vacation… it was eight in the morning and I paused and said, ‘Katie [his wife], I think I am having a heart attack.’”

Newman said that was the first time he saw the sign, ‘time is muscle,’ that refers to Eugene Braunwald’s proposed revolutionary hypothesis.

“I was in there [emergency room], and they had the IV in and there was activity on the little meters,” Newman said.

He mimicked the sound of the heart monitor of what he remembers hearing, and then not hearing.

“All these codes went off,” Newman said. “I heard my heart stop. It is a powerful thing when you don’t hear a pulse.”

During the whole ordeal, Newman said he knew he was going to be okay.

“I said, ‘this is going to be a ride,’” Newman said. “It was okay. They put adrenaline in … and my heart started right back up.”

After his heart attack, Newman had three stints put in.

“It changed my life and pulled me back to … presence, attention,” Newman said. “Where we put our attention is key.”