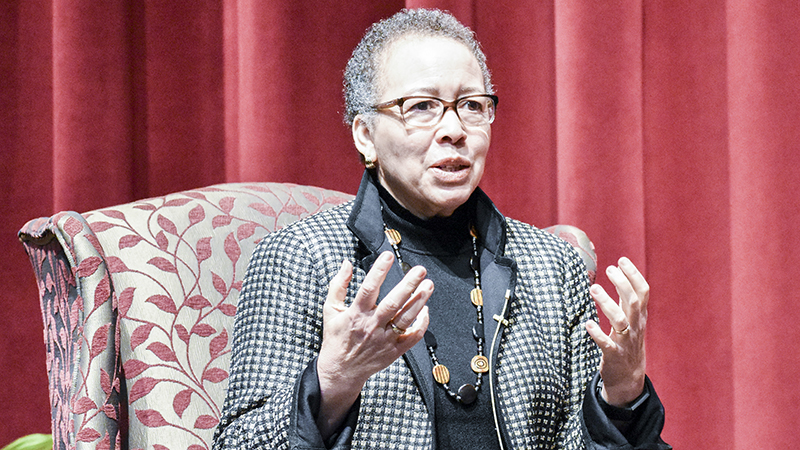 In honor of Black History Month, LaGrange College hosted a moderated conversation Thursday at Price Theatre about the importance of race conversations in education.

Dr. Beverly Daniel Tatum, president emerita of Spelman College, was the guest speaker Thursday. Instead of a traditional speech, Tatum engaged in discussion with Dr. Alicia Bonaparte about the racial climate in education.

Tatum is the author of the best-selling book “Why Are All the Black Kids Sitting Together in the Cafeteria? And Other Conversations about Race,” now in its 20th anniversary edition.

She is a clinical psychologist widely known for both her expertise on race relations and as a thought leader in higher education. She served as president of Spelman from 2002-2015 and was presented the Carnegie Academic Leadership Award in 2013.

Bonaparte earned a bachelor’s degree from Spelman College and a master’s and doctorate from Vanderbilt University. She was awarded a summer residency in Jamaica by NLS, a contemporary visual art initiative, a Nicholas R. Doman Fellowship in the Social Sciences and a Mellon Junior Faculty research award.

The conversation began when Bonaparte asked Tatum about the social climate around education reform.

Tatum said people talk about education reform because everyone wants to see better educational outcomes for students. Society wants students to go to high-quality public schools, and when they leave those schools, be ready for college or a career.

“For a lot of students, particularly black and brown students, that is not the case,” she said. “How do we fix that? That’s the question many people are asking.”

She pointed to a metropolis like Atlanta, to the outside eye, looks like many black people are doing well in the city, but she said the truth is most of those people probably came to Atlanta from else.

“They probably weren’t educated in Atlanta,” she said.

Tatum said when looking at the legacy of segregation, those in education know that the schools that are still highly segregated are likely to have fewer resources.

“Not just in terms of physical facilities and resources, but more likely to have inexperienced teachers and have high teacher turnover,” she said. “All of those things contribute to the quality of education that students receive.”

Tatum said it’s important to look at the history of education to start addressing any problems with today’s climate. She said many times when talking about contemporary problems, people tend to talk about them as if it happens randomly instead of taking a deeper look at the history to recognize intentional structures that are barriers in education.

“If we want to change the outcomes, I think we have to acknowledge that history and look at how our current practices can interrupt those past structures,” Tatum said. “If we don’t do that, we’re not likely to be successful.”

Bonaparte asked about struggles Tatum sees with educators who are working with students attempting to understand the role of racial identities.

Tatum said part of the challenge is just talking about race in the classroom. She said whether it is in elementary classrooms or college classrooms, there are many adults who don’t want to approach the subject.

“The adults in the rooms are uncomfortable with the conversation,” she said. “So, it’s very difficult to help people understand what they are not talking about.”

Tatum asked the audience at Price Theatre to raise their hand if they encountered a race-based situation and then shout out what age they were when it happened. Most of the room raised a hand and the ages ranged from 3 years old to 20.

Tatum then asked the same group to shout out words they associated with the encounter. Many of the responses were anger, fear, confusion, frustration or shame. Tatum then asked how many people spoke with an adult about the situation and most of the hands in the room that were up earlier stayed down.

“Fast forward to the college classroom, and we find you’ve got a room full of students who have learned from an early age, don’t talk about these things, don’t talk about it,” Tatum said. “And if you do, it will make me feel angry, afraid, confused, upset, you know, all those emotions are going to come back.”

Tatum said traditionally, it’s not just the students who have those feelings, it’s the faculty and staff members who feel it as well.

“That’s part of the challenge, that we have all colluded with a culture of slience about this topic,” she said. “You can’t fix something you can’t talk about.”

After the discussion, Tatum hung around to sign a few copies of her book.