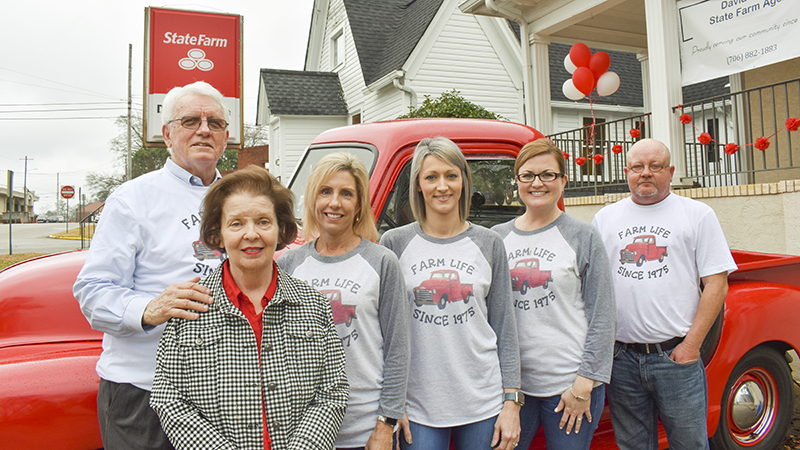 Dave Christie first came to LaGrange as an operations manager for C&S National Bank from Atlanta.

After a few years, he wanted to do something different, and 45 years later, he’s been a fixture in downtown LaGrange as a State Farm insurance agent for Troup County and West Georgia.

Christie was officially appointed as an agent on Feb. 1, 1975. On Wednesday, he celebrated 45 years with some clients he’s been in business with for more than 40 years, as well as his staff and family.

“I have enjoyed providing insurance and financial service needs for my clients for over 40 years,” Christie said in a news release from the agency. “I have been blessed with the support of my loving wife, Helen, my two sons, Chandler and Brandon, many wonderful staff members, loyal customer and business friends in the West Georgia area.”

He said he’s always considered it a blessing to have the opportunity to serve the people in the Troup County region, and he knows every time they receive a renewal bill in the mail, they are making a choice.

“Somebody is going to say yes or no,” Christie said. “I know that. I also know there are all kinds of businesses out there trying to get the good business. So, I don’t ever take anything for granted, and I thank the people for being loyal to us.”

Christie called LaGrange a great place to raise a family since it’s close enough to see the lights in Atlanta but also not the fast-paced city life.

“It’s what I call a middle-sized Georgia town, but it has some extras,” he said. “I think this town has just been blessed to have outstanding people that care about the community.”

He said the downtown development authority has been critical in keeping the city alive and attested the area is a good place to do business.

“I haven’t regretted being here for one minute,” he said.

Christie is currently writing a novel with the preliminary title of “Potholes Along the Journey of Life.” He said the title almost epitomizes how his life has been, adding people dodge a lot of potholes but still hit a few.

One of those potholes in life was a major heart attack in his late 50s when he planned to retire in his 60s. He credits having a great team at his insurance branch that thought like him and kept the business going when he couldn’t be there. He’s now had to re-estimate his retirement age and jokes that the age is now 94.

At the moment, he’s not considering retirement and says he still enjoys “playing the game.”

“I enjoy the game and playing the strategy, the coaching and taking care of people,” Christie said. “When I had somebody a check for six figures on a death claim on a life insurance policy I wrote 30 years ago, it makes you feel good that you are helping somebody’s family survive.”

Christie said when he chose to open a State Farm branch 45 years ago, he wanted to work for a company that he didn’t have to apologize for.

“If I sold a promise … I want to be darn sure the other side of that equation is a company that is going to deliver the promise quickly, professionally and the way it should be done,” he said. “For 45 years, I’ve never regretted being on the State Farm team.”