March for Dimes hosts March for Babies kick off event 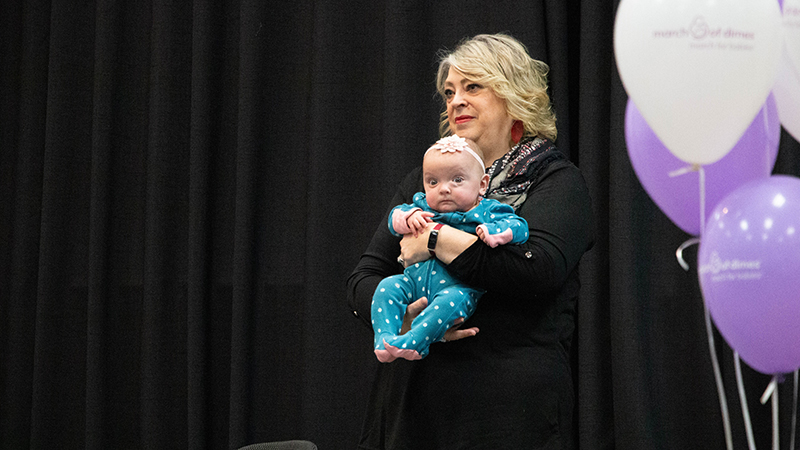 Above, seven and a half month old Ansley Kraus hangs out on stage while her mom, Rebecca Kraus, tells the story about Ansley’s premature birth and how March of Dimes helped.

The March of Dimes is gearing up for its annual March for Babies Walk.

Representatives from businesses and organizations across the community met Friday afternoon to discuss fundraising, advocacy and what they can do to make a difference.

“2020 is the year that we are going to celebrate 50 years for March for Babies,” Development Manager Carla Starling said. “We made tremendous strides, but there’s still more work to do. Today, it’s about inspiring each other to launch this season of March for Babies.”

This year, the March of Dimes is encouraging everyone to participate in the march for healthy moms and strong babies.

“The truth is, we’re not fine,” Starling said. “In our country, 22,000 babes die every year, that’s two babies every hour. One woman dies every 12 hours as a result of pregnancy or childbirth complications. It’s not fine, but together we can do something about it.”

Rebecca Kraus spoke to the group about her “little superhero,” her 7-month-old girl, Ansley, who was prematurely born at 28 weeks.

Kraus said without the March of Dimes, her daughter would not have made it.

“It all started at a 26-week prenatal appointment, taking normal vitals at the start of every appointment,” Kraus said. “My blood pressure came back really high … after tests and additional monitoring at the hospital I was sent home. The next few days I had additional swelling, no pair of shoes fit, my feet were so swollen.”

Kraus said she was in Panama City Beach, Florida a few weeks later when she had to be taken to the emergency room.

“I said there’s no way I am having my baby in Florida,” Kraus said. “I made it my mission to get healthy and get stable so I can be transported to a hospital in Georgia. After two days, I was stable enough to be transferred to Piedmont Newnan.”

“She spent 68 days in the NICU, and I did not get to touch her for 72 hours,” Kraus said. “I didn’t get to hold her until 20 days after she was born. Today, she is seven and a half months old and weighed in at 15 pounds on Wednesday. It just shows how much the March of Dimes does.”

“This year our goal is $120,000,” said Chairperson Coleman Foss. “Every little bit makes a difference. Unfortunately, in the state of Georgia we rank 50th in terms of maternal deaths during pregnancy, and that’s unacceptable.”

According to the March for Babies website, fundraising for the march supports research, advocates for policies, provides resources and programs for moms throughout their pregnancy, unites communities and partners with organizations to help families.

To sign up for the march, visit marchforbabies.org and search the LaGrange zip code.