TCSS, WellStar and local law enforcement team up to educate parents about e-cigarettes 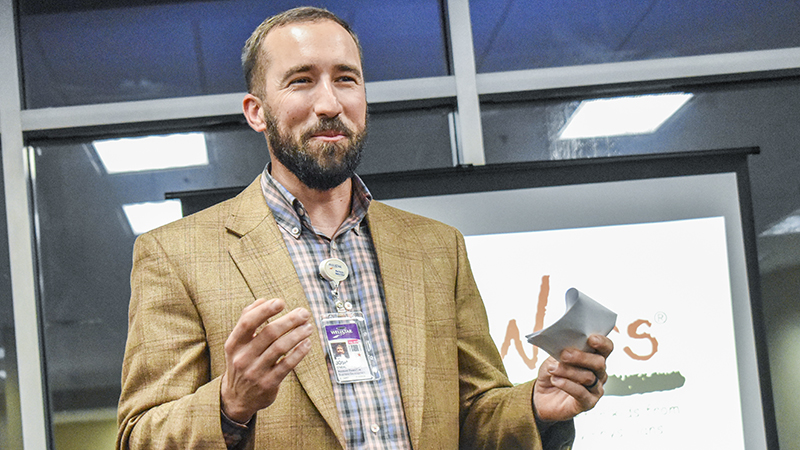 Josh O’ Neal, account executive for post acute services with WellStar Medical Center in West Georgia talked on Thursday night at the Callaway Conference Center in LaGrange about how to present the anti-smoking and vaping information to students in Troup County. The medical center, school system at and local law enforcement are teaming up to educate students on the potential dangers of cigarette smoking and vaping. — Photo by Dustin Duncan

On Thursday, representatives from each industry gathered at the Callaway Conference Center to talk about the information that will be presented to schools in the future and steps to take to reduce the number of youth using e-cigarettes.

Penny Johnson, TCSS assistant superintendent for curriculum instruction and professional learning, said the collaboration got started when a school system board member introduced her to Dr. Salman Fidahussein, chief of staff in Pulmonary and Critical Care Medicine at WellStar West Georgia Medical Center.

She said Fidahussein was passionate about the impacts of vaping on youth and wanted to make a difference.

“Tonight is basically the result of a single person making a single comment, and then reaching out and making the connections,” Johnson said. “And right now, we have the community here to work on solving or at least addressing our vaping crisis here in Troup County.”

She said the idea is to bring people to the table and focus on the medical aspects of vaping. Next is to educate parents and students about what medical professionals are seeing.

Josh O’Neal, account executive for WellStar’s post-acute services, said medical professionals are meeting with health coaches at each school about how to present the information that has been researched. The goal of Thursday was to meet with parents so that they understand what steps were being taken in the school system.

“If their kids were to come to them and ask them questions about vaping and things like that, the parents will be better equipped to be able to answer those questions and work through some of the different strategies to curb the issue,” he said.

O’Neal threw out a few stats about smoking in general, citing the Center for Disease Control. He said one out of 13 children have died prematurely from a smoking-related illness, and about nine of 10 smokers reported trying their first cigarette before their 18th birthday.

He said the number of middle and high school students using e-cigarettes have risen from 3.6 million in 2018 to 5.4 million in 2019.

Lori McClung, registered nurse with WellStar, explained the presentation provided to schools will be called Tar Wars. It’s an education process designed for kids, and it was developed by the American Academy of Family Physicians.

The content is geared toward children transitioning out of elementary school into middle schools.

“Because that’s the age that, believe it or not, kids are starting to be exposed to tobacco, tobacco products, smoking and now vaping,” McClung said. “So, you’ve got to hit them at that pivotal time when you can give them information, wisdom and knowledge.”

McClung said the big issue with e-cigarettes is that they seem to be marketed to children by the way they are presented. She said many of the products are made to look like candy.

“It’s one thing to market a product to kids that could be appropriate and could provide something positive for them, but it’s unacceptable in my book to target our kids by marketing something unhealthy and unsafe for them,” she said.

While a common theme around e-cigarettes is to say they’re an alternative to smoking or it helps people quit smoking, McClung said they still contain nicotine. She said a JUUL pod, which is an e-cigarette company worth about $15 billion, has as much nicotine as one pack of cigarettes.

McClung said nicotine, when used by young people, can impair brain development because the brain is continuing to develop up until age 25.

“It can change the brain chemistry,” she said.

“It’s been associated with cognitive and behavioral impairment, attention and learning disabilities.”

The e-cigarette industry has been able to circumvent traditional media advertising by way of television and magazines by using the power of social media to spread their message.

“That kept a lot of us in the dark, who aren’t constantly on Instagram and Twitter,” McClung said. “That’s really one of the reasons it’s risen in popularity over the last few years.”

Another trend happening with the vaping devices, according to Sgt. Mark Cavender of the LaGrange Police Department, is the use of THC products.

He said it’s not traditional marijuana either, as Cavender said the THC level is much higher. He said the marijuana found on the street is between 12 and 17 percent, and the THC products being used in vaping devices is between 89 and 99 percent.

“That is surpassing the depressant level of the marijuana THC, and now it’s becoming a hallucinogenic,” Cavender said.

Fidahussein said many of the flavors provided to go with e-cigarettes are artificial flavors, and any time those are associated, there has to be chemical to provide the taste.

“Our lungs are not built for that because lungs are built for good old air,” he said. “Any time you put anything in your lungs outside of that, it is potentially harmful.”

Fidahussein said it’s almost part of regular culture to see people suffering from the sustained effects of years of smoking because of the facts that are available now. And although the number of people smoking cigarettes in the U.S. is sustainably down, there is a new wave to cause concern.

“Just when we thought were done with cigarettes, all of a sudden, there’s this new façade, and it’s so much more popular with kids, and I don’t see it going away by any means,” he said.

Another trend Fidahussein mentioned is that those children in middle school continue to find it more popular when older people tell them how bad it is for them.

“Nobody’s done long-term studies on this,” he said.

“Nobody’s put a mouse in a cage and given it 40 years’ worth of JUUL and see what happened to them or see if they develop cancer, and they’re not going to do that either.”

He said traditional cigarettes are still a multi-billion-dollar company, and the e-cigarette industry is a billion-dollar industry.

He said cigarettes can still find ways to advertise because of strong lobbyists and profitability.

“It’s only a matter of time before these people reach that stage if we don’t control it now,” he said.