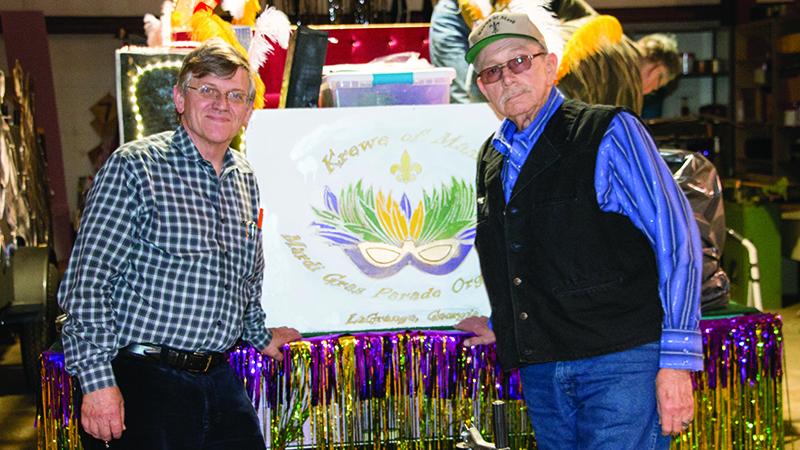 Once again, floats will parade the streets of LaGrange for the fourth annual Krewe of Mask Mardi Gras Parade.

“The tradition has grown over the years,” Gordon said. “This year’s parade has almost 50 units.”

Gordon encourages the community to be ready to catch beads, cups, stuffed animals and doubloons.

The parade will start Saturday at 7 p.m. at Sweetland Amphitheatre and go through downtown LaGrange.

New Orleans native and co-captain John Cashen said he got the parade started after he moved to LaGrange after Hurricane Katrina.

“We were happy to be here,” Cashen said. “But there was always something missing. Holidays come and go. [Up north], they have Christmas and Thanksgiving, but they all don’t have Mardi Gras.”

Cashen said he was complete after the city let him put on the Mardi Gras parade.

“For about five years after I moved here after the hurricane, I would see a news feed coming in from New Orleans from Mardi Gras,” Gordon said. “I would just think, ‘awe man I am missing the holiday.’ It’s just something I never really noticed until I didn’t have it anymore.”

Gordon and Cashen put their parading skills and knowledge of the holiday together after accidentally meeting one another. They then approached the city council with the idea.

Now, for the fourth year in a row, the two are bringing the New Orleans spirit alive in LaGrange.

“We brought home to LaGrange,” Cashen said. “The first year was breathtaking. When we made the turn onto Ridley Ave, we saw people four and five deep on the sidewalk. I really didn’t expect that. To me that was incredible, and that spoke volumes to what this place wanted.”

Gordon said without the city’s open mindedness, he doesn’t think they would have ever been able to parade.

“I think that’s what distinguishes LaGrange from a lot of other places,” Gordon said. “I’ve heard about trying to start up Mardi Gras in other cities around this area, just for it to fall flat because they weren’t interested.”

The 2020 Krewe of Mask Queen and King will be Given Sharp and Kevin Christopher Gordon.

Patty Youngblood will lead the parade as this year’s grand marshal.

“The parade is very enjoyable for all ages,” Gordon said. “As a child, it meant a lot to me because you would go to a parade and acquire all this stuff on your own. You get to come back with all these beads, and it’s just fun. We are a family friendly, fun organization.”