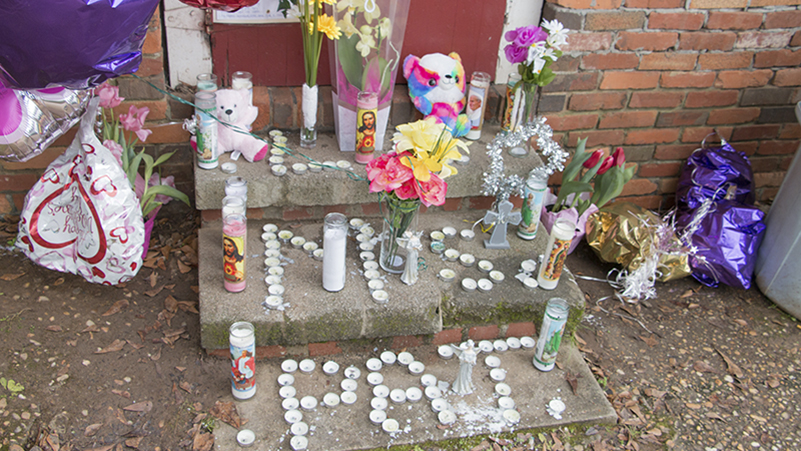 Residents near Pat’s Corner Store in LaGrange leave a memorial for the store’s owner, Patricia Underwood, who was killed by a stray bullet Friday night after a shooting incident outside her business. — Photo by Jenna Oden

Several members of the Calumet Park neighborhood grieved Monday night over the loss of a well-known community business owner.

Patricia Underwood, 78, was killed by a stray bullet in her store, Pat’s Corner Store, Friday after a shooting took place just outside the business. The corner store is located near the intersection of Ware and Union Streets.

LaGrange Police arrived at the scene at about 10 p.m. Friday to find Underwood, who was affectionately known in the community as Ms. Pat, dead inside her store from a gunshot wound.

Later that night, Andreco Darnell Parham was arrested in the 300 block of Ware Street and charged with murder.

Dr. Robert Tucker, co-chairman of the Calumet Park Neighborhood Association board of directors, said the community hosted a closed meeting Monday to discuss how to move forward. However, the meeting ended up being about residents sharing their feelings about Underwood.

“When I asked how many of you knew Ms. Pat, everybody put up both hands,” Tucker said. “Not only did they know her, but they knew her intimately.”

Tucker said many of the statements centered around how Underwood showed love to members of the community, both children and adults.

“One of the more powerful statements of the night was when somebody said Ms. Pat showed more love in her store than some of the churches,” he said.

Tucker said everybody at Monday’s meeting had a story to tell about Underwood. One of the more notable stories, he said, was about how she would extend credit to individuals who entered her store without money but needed goods.

The community will host a candlelight vigil for Underwood at 6 p.m. Friday. Then, at 6:30 p.m., they will move to the store for a balloon release.

The funeral will be at 1:30 p.m. on Saturday at St. Paul Baptist Church.

Tucker said hosting a vigil for Underwood is a small gesture in comparison to what she meant to the region.

“We could hold a vigil every night for her because she was just that popular and that well thought of,” Tucker said. ‘She is probably the best-known individual in that whole neighborhood because she’s been there so long, not only that but because of what she has done for everybody.”

Neighborhood association board member Lanon Jones said the association, along with the Center for Healing and Attachment, has decided to name the community garden being cultivated after Underwood. She said it will be called the Ms. Pat Garden. Jones said they will break ground on the garden and plant seeds on April 3.

As for moving forward with crime in the community, Tucker said the neighborhood association is in planning mode. He said a critical part of creating a safer neighborhood is to get young people involved with community events. He said it’s about getting people to reach out to young children as young as two years old.

“We can’t wait until they get older,” he said.

Tucker said the community has a Community Care program with block captains in sections of the neighborhood to relay information about potential incidents. However, he said there must be more activity.

“I’m going to be realistic here because we know that only so much is going to happen,” he said. “But we’re going to push it with everything we have, as the neighborhood association to get everybody to the point that we can, and hopefully, the whole neighborhood will gradually move the needle toward improvement.”