Daughters of American Revolution celebrates a century in LaGrange 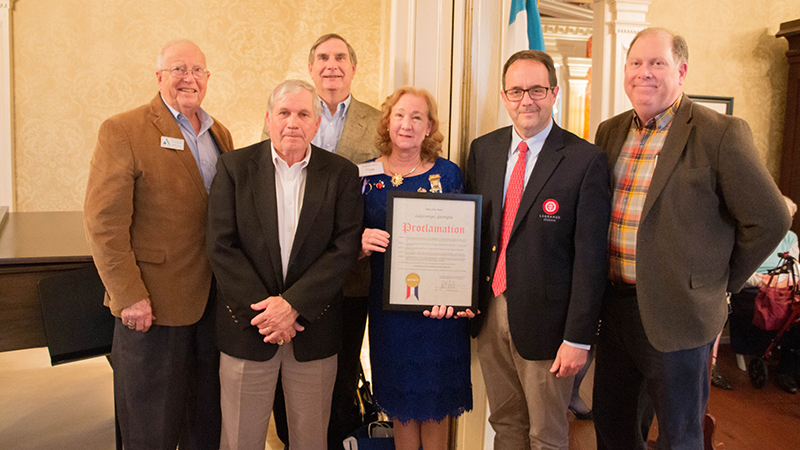 In the spring of 1919, a group of women met in LaGrange to organize one of the first few Daughters of the American Revolution Chapter.

On Tuesday, the LaGrange DAR members, along with the community leaders, celebrated the 100th anniversary of the chapter.

“Ladies in LaGrange who were members of the Atlanta chapter decided to organize a local chapter on May 8, 1894,” said Sons of the American Revolution President and County Historian Clark Johnson. “The chapter was named the Susannah Elliot Chapter. That chapter shut down Nov. 2, 1902.”

Johnson said on Feb. 20, 1919, the current LaGrange chapter of DAR was organized at the woman’s club, located on Church Street.

Johnson said the chartering date was changed twice during meetings in 1920.

“Those years have been very productive whether it is 100 or 101,” Johnson said.

Johnson told the chapter important dates and accomplishments like having the history of Troup County documented, planting the first Washington Memorial Oak Tree, donating a commemorative marker and more.

“Whether this is the 100th or the 101st year of the local chapter of the DAR, you have been a force for good for Troup County,” Johnson said. “You create and support programs locally and nationally that preserve our history, provide service to others and promote patriotism, you promote literacy, you have essay contests, you support to schools and charity, you support veterans. You commemorate historical events in American history. You commemorate historical events in American history. You have annual celebrations for the constitution and other key events in our national heritage, somewhat DAR is the forefront for.”

LaGrange Mayor Jim Thornton presented the DAR with a proclamation, proclaiming it the 100th anniversary of the chapter.

“I’m just delighted to have the opportunity to come and make a presentation to you on behalf of all the citizens of LaGrange and to give you thanks,” Thornton said. “Thank you for the good work that you have done in the past, and the good work that you continue to do today in our community…there’s multiple ways to read history and look at records … But the one thing I can do as mayor is I get to proclaim things. I am going to proclaim it the 100th year anniversary with all the caveats and footnotes.”

Thornton said it is because of organizations like DAR in LaGrange, that history has been able to stay alive.

“I’m so grateful for what you do, your work is so needed in our community, [and] throughout our nation,” Thornton said. “People don’t appreciate the importance of history, they don’t appreciate the importance of where we’ve come as a nation. We need to find ways to continue to get the message out how government works, why democracy works, why our nation has been so successful.”