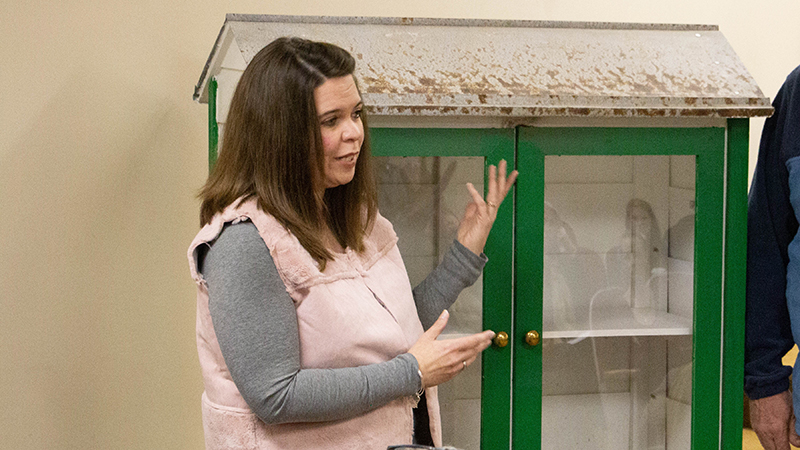 During Monday night’s Hogansville City Council meeting, one local presented Hogansville Elementary School a free food library that he and his brother built.

“We went out to the shop and are proud to say that 90 percent of this is from reclaimed material,” said Hogansville resident John Floyd. “It will help in many ways. We were just happy to come up with something.”

The food library will include books and food items that a student can take for free. Students will also be encouraged to stock the library with books or food.

“When we heard, it was going to be for both food and books. It really made it that more special,” Floyd said. “Especially, the food side.”

HES Family Liaison Melanie Baswell said they will let the students choose on their own what they want from it.

“They are generally not very picky about what they get, but not every child likes oatmeal or a jar of peanut butter,” Baswell said. “We thought we could put some other fun things in here that they might really enjoy, some things that our own kids might have.”

Baswell said this will make a big impact on the students of HES.

“We’re very appreciative, and we just can’t thank you enough for doing this,” Baswell said. “Our kids are going to be so excited about it, and knowing our kids they are going to want to stock it because that’s just who our kids are.”

Also during the meeting, one Hogansville employee was awarded for his service to the city.

“We’ve had a lot of special awards along the way,” said Interim City Manager Lisa Kelly. “I’ve shared a 10-year, and a 20-year and a five-year and one-year, and those are our milestones that we always try to make special events. This one tonight is a really, really special event.”

Electrical Supervisor John Wagner has been with the City of Hogansville for 40 years.

“John has been the go-to person,” Kelly said. “Without fail he comes in, whether a snow storm, an ice storm, it does not matter. He will ride around at night looking for street lights that are out. He does it all, and he cares about this city.”

Wagner was also awarded the Employee of the Month award.

“The city is blessed with a cadre of dedicated employees that work in all kinds of conditions,” said Mayor Bill Stankiewicz.

The city also heard from Hogansville Elementary School Principal Dr. Gina Turner about the state of the school.

That’s when Turner decided to make a school improvement plan that would go in effect for the 2018-2019 school year.

Turner said since then behavior referrals and issues have decreased, which then has increased and improved all other areas.

“When we received the CCPRI scores at the beginning of this school year, we wanted to celebrate it with the community because we certainly felt it was a community effort that made it all possible,” Turner said.

CCRPI is a comprehensive school improvement, accountability and communication platform for all educational stakeholders that will promote college and career readiness for all Georgia public school students.

“Our score went up, and we had the highest growth of any school in Troup County,” Turner said. “Our growth was 23.7. But we aren’t happy with those scores … We moved up to sixth where a lot of areas we were at the very bottom. I will not be satisfied until we are number one.”

Also during the meeting, the council discussed the following:

4 The first reading of an amendment to zoning ordinance that deals with the sizes of temporary buildings, cargo containers and pods.

4 The council approved a Service Delivery (SDS) Amendment to allow for Housing and Workforce Development. The proposed amendment states that each of the four governments in Troup County will provide housing-related services in its respective jurisdiction only, with Troup County providing this service in unincorporated Troup County.

4The council approved to sign the updated statewide mutual aid agreement which means that, should Hogansville face an emergency or disasters, they would be eligible for help from other participating agencies. If Hogansville is providing aid, the city is eligible for reimbursement for costs accrued while helping.

4 The city approved to receive a land donation on the corner of Main Street and Highway 29.