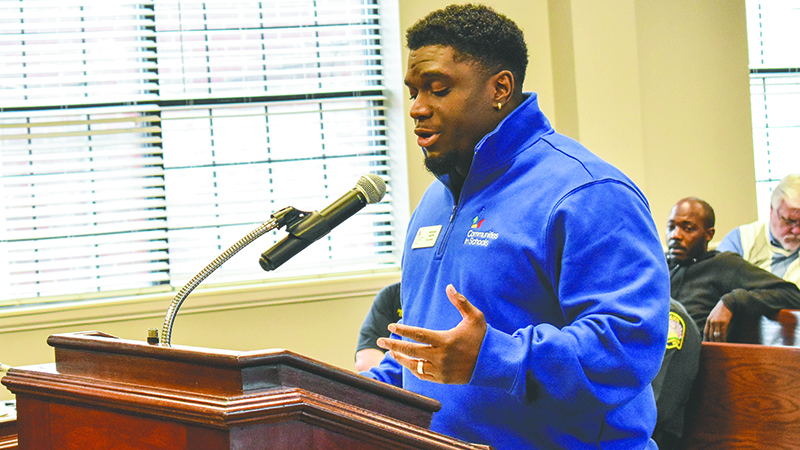 Troup County Community in Schools updated the LaGrange City Council Tuesday about some of the new programs happening to help foster children and children with guardians who are incarcerated.

Nicholas Griffin, Community in Schools site coordinator at Callaway Middle School, said the county has been designated as a State of Hope site. He said the designation allows the organization to hire a full-time staff member to assist the county’s foster care population and their families, including those students who are in kinship care placements.

Griffin said more than 60 organizations apply for the grant and CIS was one of the 10 chosen.

He said 75 percent of foster care children are performing academically below their grade level.

“Community in Schools of Troup County hopes to begin changing that trajectory of many of these students,” Griffin said.

Another program highlighted Tuesday night was that CIS can now offer services to students who have a guardian who has been incarcerated.

Griffin said the organization could facilitate services for those who have been affected by gangs and incarceration. The program provides mentoring for students as they transition from the juvenile justice system back to society to reduce recidivism.

She said the grant will support a curriculum and provide extra funding to take the students on field trips and college visits.

“Due to their guardians going to the prison system, the children find themselves homeless or not being able to cover their basic needs, and we are able to provide support for them,” Lewis-Coverson said. “It’s an additional layer of support for those kids. It also gives them alternatives, so they don’t follow the same path.”

Griffin said the CIS also has partnered with the Pain of Prison System program, which is also under the U.S. Attorney’s Office.

The program is meant to provide safe space and self-expression and self-empowerment for children who have been affected by incarceration. Griffin said the program meets once a week and students talk about how incarceration has impacted their lives.

“It’s really an emotional thing to see students that are affected by this daily,” Griffin said. “We have numerous students who have parents on death row in my room just alone. It’s definitely life-changing, and it’s well-needed.”

Griffin said the number of students CIS supports has grown from 2,535 to 4,242 in the past year. He thanked the city for their contribution to the program.

“Not only has the city been financially supportive, but many city employees have volunteered for our financial literacy simulation reality program,” he said. “Your support is the catalyst in our ability to leverage additional funding to expand our footprint.”

“We know that you have a great model small that’s evidence-based that has been proven to work over the over the course of the years, and we’re just thrilled to be able to continue to support your work,” he said.

Councilman W.T. Edmondson said he’s a cheerleader for Community in Schools. He said it’s great to receive the annual reports about the organization.

“Community in Schools really works as a catalyst for students that would ordinarily drop out of school,” he said. “But you all have found something to forge that gap there to keep them from dropping out, and we appreciate you so much.”