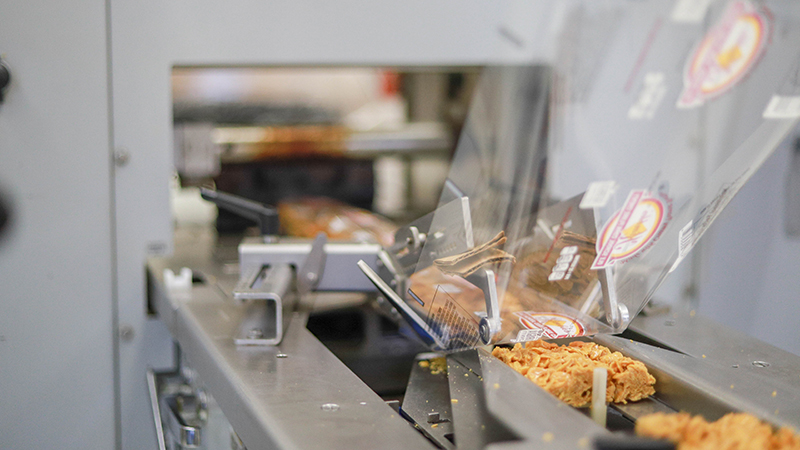 The product was featured on the shopping network QVC.

Last year at a snack food trade show, Shannah Kuhn, Kimble’s Cornflake Candy Manager, was approached about an opportunity to showcase what they deemed as a “yummy cereal and peanut butter treat” on QVC.

“Kimble’s Candy has been a strong passion of mine since I started with the company over six years ago,” Kuhn said. “I love the candy and to be able to take this passion to QVC was an amazing experience.”

Kuhn was on air for only 7.4 minutes and within that short time frame she not only generated about 30 calls per second for an order but put the local LaGrange company on the map to thousands of people who watch daily.

Kimble’s product was selected to be on the show from more than 100 other vendors. Christy Lumpkin, Kimble’s fulfillment supervisor, said that they had been working on that seven minutes of fame for a year now.

“Last year we went to the show in Chicago called Sweets and Snacks, it’s the largest candy confection show in the world, and we ran across Jean Murray, who works as a buyer for QVC,” Lumpkin said. “She actually came to the booth and didn’t want to taste it. She walked off and then came back because she heard Shannah talking about how much she loved it. She said she saw her passion and had to come back to the booth.”

Kimble’s Food by Design began in 1985, but Carter said they didn’t start making candy until 2008.

“We started with a stove on a pot one batch at a time,” Carter said. “We scaled it up from there. When we first started, we were hand wrapping it and sealing it on a pancake griddle.”

According to Carter, they were able to sell about $50,000 boxes worth of the corn flake candy.

“Shannah will be able to walk into her next sales call and say that she just left QVC,” Carter said.

“The residual and the synergies you get off of being on there is your payoff.”

Lumpkin said that the community has been sharing how proud they are that this happened.

“There have been people who don’t even work for Kimble’s throughout the community who have been sending us messages of how proud they are,” Lumpkin said.

“This is their town, and they were excited to share this with us.”

The candy will be featured again on air on March 7 at 7 p.m. for the QVC 2 Channel Show.