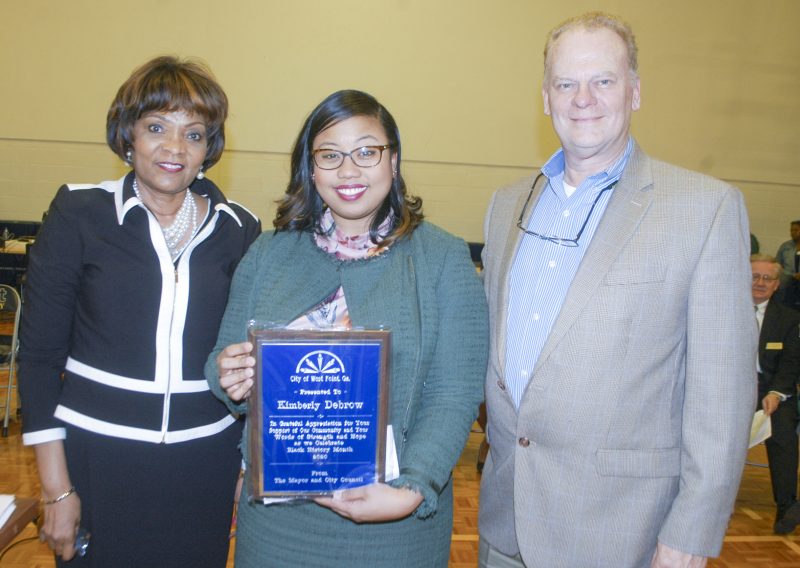 WEST POINT — The City of West Point hosted its eighth annual Black History Program Tuesday afternoon in the West Point gym. This special event during Black History Month celebrated student achievements and contributions being made to community improvement by young adults. Emcee Sandra Thornton opened by saying that West Point was a place for inclusion.

“We call it Black History, but we celebrate all races in West Point,” she said.

That point was brought home by the speaker for the day, Kimberly DeBrow, who is the assistant district attorney for DeKalb County in metro Atlanta and works with adults with disabilities. She lives in the Newnan area and is a graduate of the University of Georgia School of Law.

“This is a special time of year,” she said. “Black History Month is one of my favorite times of the year, and I am so proud to celebrate it with you today. It is hard for me to go out there and re-do what so many people have done so well in the past. I’ve decided instead to share my story with you. It’s the story of me and my family and our journey to get here. It may not be that exciting, but I do hope I can leave you with one question and and to change the way you think.”

Her parents met near Seoul when they were both in their twenties. At the time, Korean women were discouraged from intermingling with blacks and especially from marrying them.

“It was an unwritten but widely accepted rule,” DeBrow said. “My dad had grown up in rural area outside Plant City, Florida. He loved the country life. My mom didn’t speak a word of English when she met him. She was so tickled when he got interested in her. At first, he was more interested in her friend. When that didn’t work out, he turned to her.”

DeBrow said that her future dad made a big impression on her future mom when he took her to a Baskin Robbins on the base. She really enjoyed having the chance to sample those 21 flavors of ice cream.

“My mom became pregnant with me when she was in Korea,” DeBrow said. “At the time, many Koreans had a limited view of African-Americans. They didn’t think you should associate with them, much less have their children. There was pressure on them and their relationship. She considered having an abortion. She felt it was her right, but people around her didn’t want her to do it.”

They had to move from the outskirts of Seoul to inside one of the world’s largest cities. “In Seoul, people were too busy to care about something like that,” she said.

When Kimberly was four, her dad’s tour was up in Korea and the young family relocated to the U.S.

“My mom was both excited and scared about moving to the U.S.,” DeBrow said. “I still can remember being in Korea, and there is a happy ending to this story. When my mother’s family got to spend more time with my dad, they saw that he was a good person and a good husband. They realized that what they had believed about black people was not right.”

They learned the lesson spoken by Dr. Martin Luther King Jr. in 1963: don’t judge people by the color of their skin but by their character.

“That was over 30 years ago,” DeBrow said. “We have come a long way but still have a lot of work to do. Love is universal. Hate and ill feelings people have is learned behavior. It’s what children learn. If they are taught to hate, we perpetuate something that’s not natural. We can all ‘un-learn’ bad behavior. We can always control what we think, do and what behavior we accept. It must be prevalent in everything we do and what we teach our children.’

“We shouldn’t ignore having been hurt,” she said.

“If we do our individual part, hopefully it can catch on. Diversity is not just a catchword. It’s not just the trending word of the day. I encourage you to think about this. A diverse workplace shapes the workforce. Women, minorities and immigrants will very much be part of our future workforce. This will strengthen our communities and our economic competitiveness. It reinforces our humanity.”

DeBrow quoted fellow Georgia and former president, Jimmy Carter: “Our differences are the source of our strength.”

“We need to be viewing through a global perspective,” she said. “The U.S. leads the world because it is a diverse nation built upon the contributions of many different people. During Black History Month, we must remember that we don’t celebrate one race. America is a place where everyone is entitled to an equal opportunity. Our country promotes this, and it’s what makes us great.”

DeBrow then posed the question she spoke of in her first remarks.

“We are inspired what (civil rights) activists did,” she said.

“It took lots of courage to do what they did. My question for you is this: Are we courageous enough today to inspire others? Can we fight commonly-held beliefs? Can we forge relationships with people who don’t look or act like us? Can we make friends with people who are different in real life and not just on Facebook?”