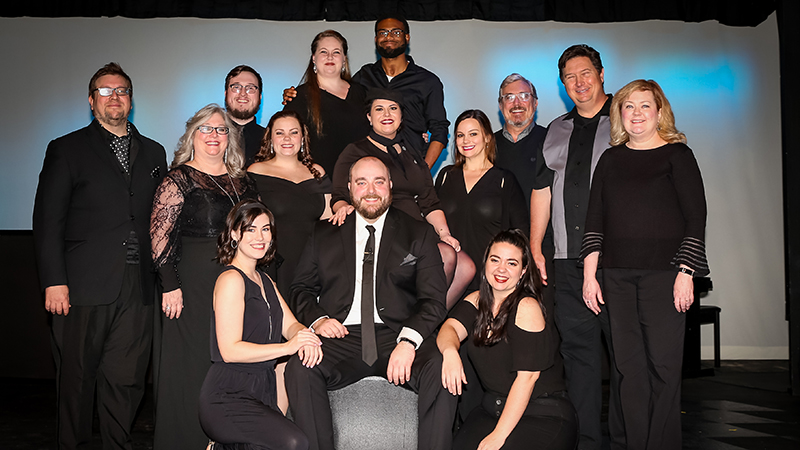 The Lafayette Theatre Company is putting on a Tony-Awarding winning musical with one of the most talented casts in the region, according to the show’s director.

Valerie Longshore-Sargent, director of the theatre’s rendition of Stephen Sondheim’s “Company,” has been working with LSPA for about 20 years and she’s still having fun.

“I will say that this is single-handedly, in all the years that I’ve done theater, easily right off the table, the most talented cast I’ve ever worked with,” Longshore-Sargent said. “They have allowed me to be creative, and I’ve allowed them to bring a lot to the table. And if people just came for the singing alone, I think they’ll be blown away.”

“Company” is a musical comedy that first came to Broadway in 1970, and it centers around a character named Bobby, who is celebrating his 35th birthday at the beginning of the show. Longshore-Sargent said the show is about how Bobby hasn’t settled down and found the right life partner yet, but he has several married friends who have plenty of opinions about when and how he should get married. She said three girlfriends enter Bobby’s life throughout the show.

“It’s not necessarily told in a linear order,” Longshore-Sargent said. “So, each scene is almost a vignette or a snapshot.”

She said the friends’ marriages are perfect in their own way, while at the same time are completely dysfunctional.

“I think like many people, he (Bobby) sort of contemplates, I want this, but do I want this?” she said. “And so, I think it’s really relatable to a lot of people.”

The cast hosted four shows this past weekend at the LTC Black Box Picnic Theatre, located at 214 Bull Street in downtown LaGrange. There are two more shows on Friday on Saturday at 7:30.

Valerie Longshore-Sargent said there has been a good connection with the audiences so far and the realization that the subject material on the stage relates to real-life conversations.

The play is billed as either a dramatic comedy or a dark comedy because of its real-life connection, she said.

“It’s because it’s touching on the truth,” Valerie Longshore-Sargent. “And so, the truth sometimes is difficult, and then the truth makes us laugh.”

Adam Thornton, who plays the lead, Bobby, said this role is different because it’s a real-life scenario.

“When you look at a lot of other musicals, and you think it’s fantasy. It’s a story. It’s got a happy ending, and it’s got all this stuff,” he said. “This (show) is just real, and it’s raw. Most of the stuff that can that happen in the musical is the stuff that can and has happened to somebody.”

He said the feelings his character goes through in the plan relate to his own life in a way, which helped him find a connection to the role.

“It’s somebody who’s trying to find something that really doesn’t know how to find it or where to go,” Thornton said. “I’ve told a lot of people that It’s like I didn’t have to do a lot of research. This is just my late 20s.”

Kevin Goodson, who plays Larry, is making a LaGrange theatre homecoming of sorts. He graduated from Troup High School, went away to Florida State for college and became an executive director of a theatre in Tallahassee.

Now, he’s back and plays a character whose wife has an attraction to Bobby, and while he is highly cognizant of the situation, he’s deeply in love with his wife.

While he’s been back in LaGrange for a few years, the first time again on stage was an experience for him.

“I told the director that it’s almost like having an amputated leg reattached,” he said. “I’d forgotten how difficult the process can be, especially with this show.”

Jack Morman, who plays Peter in the show, is a veteran of the theatre in LaGrange, said the atmosphere of the show, and picnic-style production is what makes it exciting for actors.

“This is a great stage to put shows on because it’s an intimate atmosphere because you know instantly whether the audience is liking it or not,” he said. “Because they’re right there in your face. The fact that they’re actually eating and drinking right there and having a good time with their eating while you’re on stage, putting on your show.”

The actors received their scripts for “Company” just after Thanksgiving and have been rehearsing three times a week for a few hours since.

The show is picnic theatre, meaning the playhouse opens an hour before the show, and people bring in meals, and it’s set up like a mini-potluck.

“It’s very communal,” Valerie Longshore-Sargent said. “By the time the show starts, people have loosened up.”

For more information or how to buy tickets, visit www.lsparts.org.