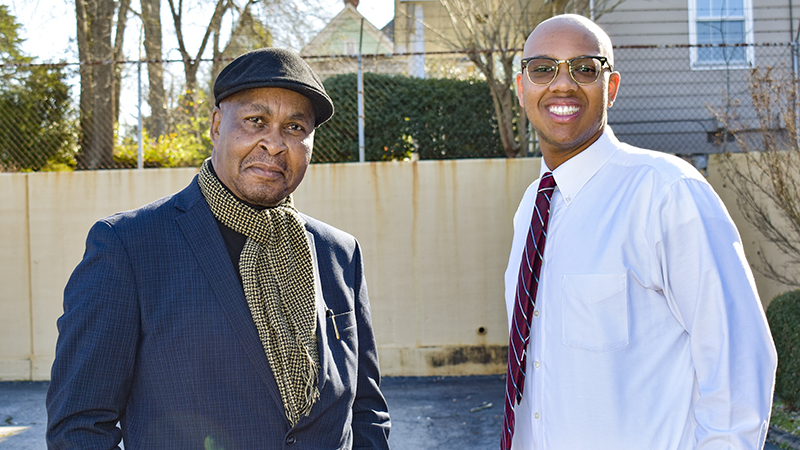 Sidrick Cameron was ready to forgive his dream of going to college after his first couple attempts at the Scholastic Aptitude Test, better known as the SAT.

However, after a six-week course with the Greater Achievement Youth Empowerment Academy, Cameron said he increased his SAT score by 210 points and will be attending Morehouse University. The average increase between tests on the SAT is about 40 points, according to the Manhattan Review, an SAT prep consulting firm.

Cameron is a junior at Callaway High School, who is graduating after three years in high school. He said he will pursue a business degree in finance with dreams of being a chief financial officer.

Glenn Dowell, community liaison for the academy, said the academy is a nonprofit organization that has hosted a six-week SAT prep review for the past three years. He said the academy has tutored around 300 students in that time with average SAT scores of about 1,000 or above and ACT scores of 19 and above.

Dowell said the organization has verified data that student’s average increase on the SAT is about 74 to 100 points.

“We make sure in the beginning when the kids come to us that they understand it’s not a self-esteem class,” Dowell said. “This is one where when you come in, and you should already know why you’re going to take the test.”

The classes run every Saturday from 8 a.m. to 1 p.m. for six weeks.

The course is $35, which Dowell says is significantly cheaper than most SAT Prep classes. The courses are run by successful college students who have scored high on the test but can also relate to the younger crowd.

The class is structured to be hyper-interactive but also no-nonsense, Dowell said.

“In terms of your understanding, you know why you are there, and why the people get up early in the morning to be there to tutor you,” he said.

The program also isn’t afraid to show students the door with their $35 if they are disrespectful and cause trouble with the others trying to learn.

Cameron’s experience with the SAT has been a rollercoaster. After his first go-around with the SAT, he was ready to give up on college completely. But his mother, Tanya Jones-Cameron, district 7 representative for TCSS, asked him to give it another try. He purchased an SAT prep book but said it wasn’t clicking.

When he took the second a second time, he did increase his score by 50 points but still didn’t feel it would be good enough. He confirmed it further when he received his first rejection letter from Fort Valley State University.

“I said my dreams of being a doctor or lawyer are shot,” Cameron said.

He said he had several dual-enrollment credits during his high-school career and felt getting a degree from West Georgia Technical College and learning a trade was his best chance at a career.

However, after Jones-Cameron listened to a presentation from Greater Achievement at a TCSS board meeting, she encouraged her son to try the course. Dowell said formal data detailing student increases were shown at this meeting.

Cameron repelled at first because he didn’t want to go to classes on Saturday.

“I go to school through Monday through Friday. Saturday is my time to rest,” he told his mother at the time.

Mom got her way. And after two weekends in the course, Cameron said he started to see how the class was structured and saw why it resulted in increased scores.

“By that second Saturday, I was actually excited to get up at 7:30 in the morning and make my way over to Cannon Street because I could see a difference in just two Saturdays,” Cameron said.

Cameron said the classes force students to engage in the subject material, and if students aren’t prepared, the course will reveal it.

Dowell said he does make guest appearances to help with certain courses, and when he calls on students to participate, he expects answers.

“I don’t want to hear you tell me to go to somebody else because you had a hard night playing football,” he said.

“That’s not a variable that’s acceptable in this class.”

Cameron said it’s different having someone explain the material to him instead of reading it in a textbook.

“It’s also better to have other students because they can relate to us a bit better,” Cameron said. “They know the way we interact, and they have actually gone to college and seen the success from this class.”

Cameron said the class is more than just preparing for the SAT.

He said Dowell helps them learn about applying for financial aid, how to get scholarship money and general college preparedness outside of the classroom.

Now that Cameron is set to head to Atlanta in the fall to Morehouse College, he still wants to succeed and then come back home.

“I want to come back home and open a school of my own to teach financial literacy,” he said.

“Because a lot of people are not as fortunate as I have been to watch their parents buy a house, buy a car, maintain good credit and more so. I want to teach how to become successful and how to manage money. I feel that would something I can do to benefit the community that has been so gracious to me.”