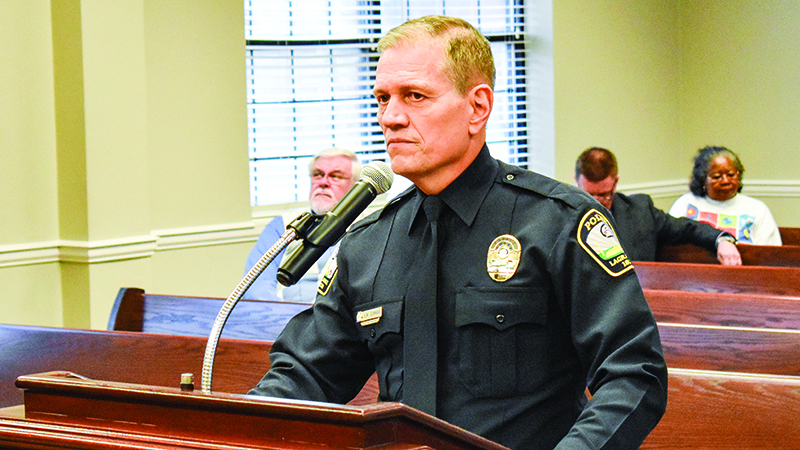 LaGrange Police Chief Lou Dekmar was quick to point out there were zero traffic fatalities in LaGrange in 2019.

“I think in the 25 years that I’ve been police chief we’ve had two years with zero traffic fatalities and 2019 is the third year,” he said. “We’ve had as many as seven, but most years it’s been three or four.”

Dekmar was referring to numbers from the police department’s 2019 annual report presented to LaGrange City Council Tuesday evening during its business meeting.

LaGrange Mayor Jim Thornton asked Dekmar why the city seems to excel in many other areas when compared to cities of its size, but when it comes to accidents, the numbers are higher.

“One of the factors that not a lot of communities like us have is that we have an infusion of folks that come here to work every day,” Dekmar said. “So, we have a 30,000 population, but during the day, we probably serve closer to 50,000. I think that’s a factor.”

Dekmar said out of those arrests in 2019, the use of force was deployed 27 times for just under 1 percent of the time. He said the average for accredited police departments is typically between 1 and 3 percent. Non-accredited agencies can see a ratio between 3 and 5 percent.

“I think the combination of robust training policies and the commitment our agency made, which was supported by this council about 10 to 12 years ago, to have every office engage in CIT (Crisis Intervention Team) training has paid dividends as it relates to use of force encounters,” he said.

The number of police pursuits remained level from 2018 at 12 pursuits. However, that number is down from 18 pursuits in 2017, which Dekmar said it due to more training within the department.

“We train our officers to constantly analyze whether or not the pursuit is safe or engaging in,” he said. “When it becomes clear that the violator is not going to stop, we do a cost-benefit analysis.”

Altogether, the police department responded to 52,307 calls for service in 2019.

Another number Dekmar was happy to report Tuesday night is the number of euthanized animals in the city due to partnerships the police department has created with local shelters.

“That’s still far too many,” Dekmar said. “But we’re making progress as a result of partnerships with the Atlanta Humane Society, the Puppy Pipeline, Paws of the Main Society in Columbus.”

Code enforcement violations are up, according to the annual report, but Dekmar said compliance levels are high. Although there were 3,958 violation citations, there were only 36 court cases as a result.

Dekmar did inform the council he will be asking for two additional officers for a repeat offender program.

“If you were back those numbers out, repeat offenders significantly impact our crime level,” Dekmar said.

“We spend a couple of hours reviewing with those individuals the emphasis of if you feel like you’re jammed up, and you don’t have anywhere to turn, call the police department, and we can find someone to assist you in the short term,” he said.

Some of that assistance could be providing a bicycle for those who don’t have reliable transportation to get to work. He said caseworkers could also assist individuals in finding housing, assistance and medication.

“I think the partnerships that we establish, to deal with things like homelessness, mental illness, truancy, delinquency, suicide, are also resources that we can help plug these folks in,” Dekmar said.

He said the other part of that is that if those parole offenders insist on doing the crime, the police also need the resources to provide adequate supervision, intervention and contact so people don’t get hurt or facilitate a series of crimes.

“We are seeing an increase, as other communities are around the state, and around the nation, in gun violence,” Dekmar said. “That is concerning to me.”

Dekmar attributed the decrease to the council providing additional resources about eight years ago when the number of gang-related shootings reached double digits.

“You all provided additional resources in the way of another investigator, an analyst and also a prosecutor,” he said. “And so we’ve seen a reduction in the number of violent crimes as it relates to gangs.”