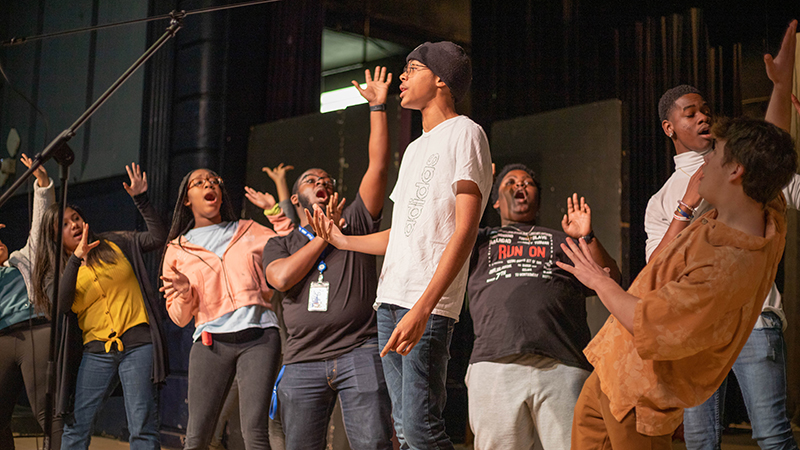 For more than two decades the LaGrange High School Black History Program has aimed to educate and inspire.

Adrianne Redding, Director of Alive in 55, said this is the program’s 22nd year and was originally started by her father. The performance will take place this coming weekend on March 6, 7 and 8.

“I came up through the program, and we have a lot of alumni that come back to help,” Redding said. “One thing we tell the kids is that black history is still part of American history. Each year, the performance is about different events that happened during American history like the civil rights, the slave era and just different storylines.”

“There is also a back story on the Pearson family,” Redding said. “It starts out as a joyous occasion and then they run into a little bit of trouble. It shows the progression through their circumstances.”

Students from LaGrange High School, along with students from Troup and Callaway will perform the show.

“I’m so excited this year because this is a very unique group that I am working with this year,” Redding said. “They are just explosive with talent and have a lot of energy. As a director, that makes me excited. I am excited to present them on a stage and give them the opportunity to shine.”

Redding said LaGrange has always hosted it because they are the only local school with a large Black History Program.

“I actually graduated here in 2006 and took over the program when my dad retired as an administrator from LHS,” Redding said. “Someone needed to continue the program. So, this year will be my fourth year as a director.”

The group of students have been rehearsing since November but still have some details to iron out before hitting the stage.

“I am looking forward to them performing the story,” Redding said. “I’m hoping it’ll top last year’s script that I wrote. I want the audience to see it and kind of just see it from the perspective of the family. They have an opportunity to see to see different civil rights events, but they also get the opportunity to see it from the lens of a character. I try to make the character as familiar as possible, a character where they can put themselves in their shoes and say that could have easily been me if it had been 30 years ago or 40 years ago.”

Redding said she hopes the community learns something from the program.