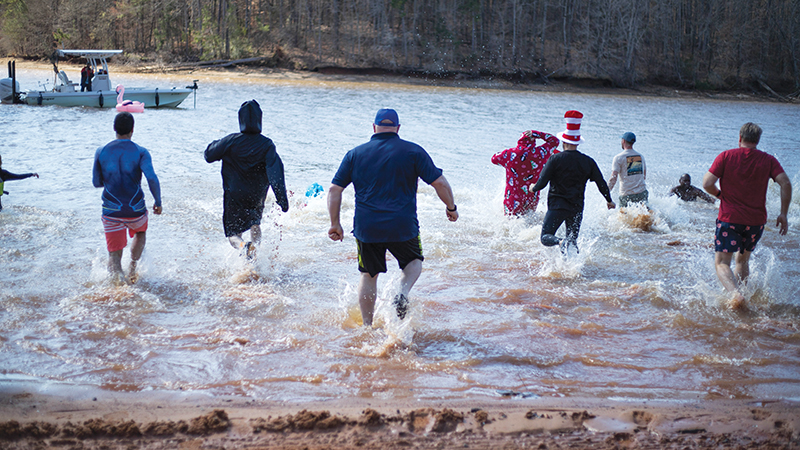 For the second annual plunge, hosted at Highland Pines Resort and Marina, sign-ups doubled for the plunge compared to last years.

“We were super grateful for that,” said Helping Young Professional Engage (HYPE) President Anabeth Ivey. “We were excited to see all of the families that came out to support and all of the four-legged family members that all came out to watch everybody.”

A portion of the proceeds raised went to support Chattahoochee Riverkeeper, and its efforts to clean up West Point Lake.

“We’re working on other projects like getting all the plastic out of our lake,” said CRK Middle Chattahoochee Director Henry Jacobs. “Being out here, supporting Riverkeeper is helping us get plastic out of our waters. Come join us for any cleanups that we have coming up this year because that’s another way to help us remove some that plastic that’s already out here on the lake.”

Jacobs said he hopes to get the word out that West Point Lake is a great place to be.

“I think having Henry come out and have a presence there really helped give him and Chattahoochee Riverkeeper a good opportunity to explain a little bit more about what’s going on,” Ivey said. “They are doing really great work. People who are passionate about the lake and like to support the lake cleanup efforts were able to hear firsthand from him all the work is being done.”

Immediately following the plunge, anyone could sign up for dash for the cash where plungers raced back to the water to swim to a marker for the chance to win $450.

Josh Gynther took home the prize by swimming to and from the marker first.

Ivey, who took the plunge herself, said this year there was a larger female turn out.

“I know Regina Ingram, one of our sponsors, was very excited for the turnout,” Ivey said. “She was actually the only female plunger last year, so she was really grateful to have some girls out there with her this year.”

Ivey said due to the higher success of this year’s plunge, they plan to host it again next year.

“Overall, I consider it a booming success, as far as the second year goes,” Ivey said. “We’re very excited to go ahead and start planning for Polar Plunge 2021.”