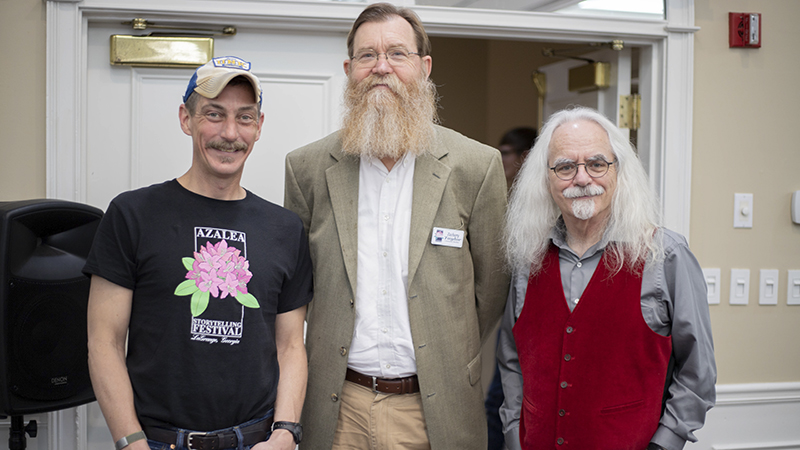 One of Georgia’s oldest story telling festivals will take over LaGrange for the 24th year again this weekend.

On Wednesday afternoon one featured performer, Bill Lepp, visited the Rotary Club to tell one of his stories.

The West Virginia native, is a five-time champion of the West Virginia Liar’s Contest. He told the audience a few lies in his story Wednesday afternoon about his time as a fifth grader in a town he created called Half Dollar, West Virginia.

The festival won’t begin until Friday but featured story tellers and festival members have been in the schools reading to children as a part of National Read Across America Week.

“This year I am especially excited,” said committee member Zachary Taylor. “This year will be our 24th year, but next year will be our silver anniversary, which is quite a big deal because a lot of storytelling festivals don’t make it to 25 years.”

“It’s an amazing thing,” Lepp said. “We go to festivals all over the country. A lot of festivals don’t have the same impact that the festival has had on this community.”

Lepp said that the festival brings in visitors from more than half the country.

“Every year, people come from all over to come to this festival and stay in your hotels, shop at your businesses, buy your food and throw their cigarette butts on your streets,” Lepp joked. “This is a wonderful festival and if you’ve never been to it, please do come this year. It’s certainly something this city should be proud of.”

The festival will begin Friday at 7:30 p.m. at LaGrange College’s Callaway Auditorium. It will continue throughout the weekend on both Saturday and Sunday with shows all day.

“The community should come because it is terribly entertaining,” Taylor said. “It is just outrageously entertaining. It is a good family event and a lot of people think story telling is just for kids, but as demonstrated today, it’s kind of actually of an adult activity.”

Taylor said he loves how much the festival supports the community.

“It is just a wonderful group of people of storytellers,” Taylor said. “We look forward to seeing the tellers as they come, and a couple of years later they always come back and remember who are.”

Tickets are available for purchase at LSPArts.org