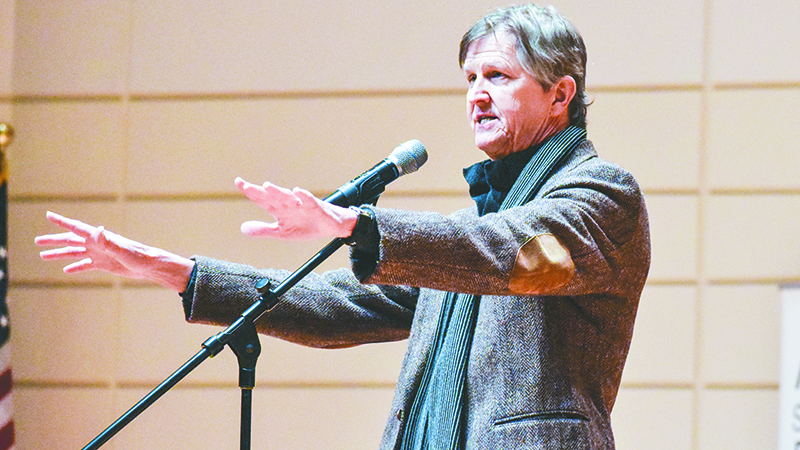 Stories, music and jokes were all involved in the 24th Annual Azalea Storytelling Festival this past weekend at the Callaway Auditorium at LaGrange College.

The fun kicked off Friday night with music by Carter White on the piano, and then the first of six storytelling sets throughout the weekend.

She said the monument from Friday night carried into Saturday afternoon.

Many of the storytellers who perform at the festival are good friends, Cain said, which makes the festival easier to run.

“We try to give them a good dose of LaGrange hospitality, and it just makes the festival go much, much smoother,” Cain said.

Cain said several of the committee members go to the International Storytelling Festival, typically held in Jonesborough, Tennessee, to look for storytellers who may be a good fit.

“We like to have a ratio of tellers that our people will know, and maybe introduce one new teller a year,” she said. “And in this case, that’s Kim Weitkamp.”

After 24 years in the community, Cain said there is still a bit of apprehension about what storytelling actually means. She said some people think the festival is about reading to children and others think it’s a festival about telling lies, as in the old Southern tradition of “telling stories.”

“The truth is, we talk to each other in the story, right?” Cain said. “When people gather together at a meal or they’re in the car, the first thing they do is tell stories about what happened.

She said telling stories is part of who people are.

“I think there is still a learning curve to say to our community, ‘Trust us, you’re going to enjoy this, so come in and just give it a chance,’” Cain said.

Irwin said the LaGrange festival is particularly great because the city knows how to promote it well.

“You can’t drive through this city without knowing this was here,” he said. “This festival, in particular, is pretty delicious.”

“We’re expecting them to see the pictures that we’re giving them,” he said. “And the pictures they see are different than the person next to them. But I just love getting those sparks going.”

He said all of his stories come from a kernel of truth, just like any fiction.

“Any good fiction comes from a true place,” Irwin said. “Because there has to be a social truth behind what I’m saying, and when it rings true, you can laugh because it rings true.”

The storytelling festival is a signature event for the Lafayette Society for Performing Arts, with usually about 2,000 people brought in each year. Next year will be the festival’s 25th anniversary, with the kickoff starting this past Sunday as this year’s festival ended.

Cain said the festival is making an open invitation for all churches and civic groups that need a program for the months of April through February to reach out to them. She said they would provide a local storyteller to share their talents and promote the festival.