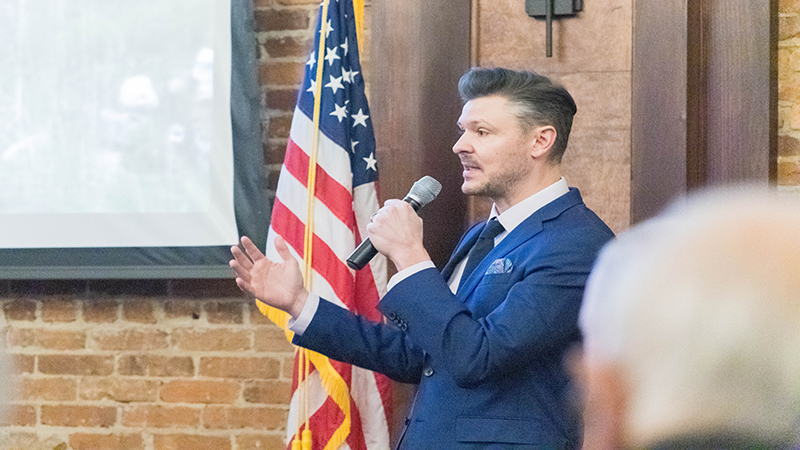 “Now I am an adult, trying to be, and I make YouTube videos for lack of better words,” Crosby said. “Usually when I tell people that they’re like, ‘cool, what do you want to do eventually?’ And ‘I’m like, eventually I want to keep making funny videos with my friends for money.’”

Before his YouTube career took off, Crosby was a working as a videographer for his own business. But he wasn’t happy.

“When I was just at a peak of my early success starting a business, when I was doing the thing that seemed like the obvious thing in my career, and doing it well, making money and building a business, I was also miserable,” Crosby said. “There was something that just wasn’t there for me, which was really confusing because I thought I was doing exactly the right thing with my life.”

Instead of spending his time doing what he loved with filming and editing Crosby was chasing down clients for payments.

“It was all this stuff that I just hated,” Crosby said. “The worst part was that even when I was doing the thing that I did love … it was not fun. It was this feeling that I can’t really describe, but if you’ve had it you know it.”

After deciding he was miserable, Crosby quit for approximately two months.

“I just kind of hung out with my friends and laid on my bed and stared at the ceiling and wondered what I wanted to be when I grew up,” Crosby said. “Eventually, I got pretty bored. So, I just kind of picked up my camera again and started playing around.”

One of Crosby’s friends, who was on staff at a high school ministry, asked Crosby to help make a few comedy sketches for the students at Young Life.

“There was no YouTube at the time, we were just shooting videos and showing them to a handful of high school students, and then sometimes uploading them to a website,” Crosby said.

Fast forward to when YouTube first came out, Crosby and his friends had just made a video of things you can’t do when you’re not in a pool. They uploaded it and waited to see what happened.

“It sat there for a couple of weeks, along with a few other videos and suddenly it started spreading around,” Crosby said. “Before we knew it there was thousands of people watching this video things you can’t do when you’re not in a pool.”

Then, Crosby said he woke up one day with more than 10,000 emails in his inbox.

“YouTube had posted it on the homepage and for all practical purposes we had a viral video,” Crosby said. “It went overnight from thousands of views to millions.”

Crosby and Stanton became a world-famous YouTube sketch comedy duo whose shorts have amassed hundreds of millions of views online and made headlines on some of the world’s largest publications (Today Show, Late Show, CNN Headline News, Huffington Post and Mashable).

Now, Crosby has found a passion in helping others and teams of people pursue their passion.

He said that since the last time he was in Troup County 30 years ago, a lot has changed and that businesses must adapt to that change.

Crosby said for businesses to grow and have more, better ideas they must be more curious, be good listeners and be less judgmental.

“If you negate an idea in a room, you actually have to go into adult timeout when I’m leading a meeting,” Crosby said. “Because when you can learn to accept ideas from your employees that you don’t really always understand or from your vendors … you can learn to take that in and postpone judgment … You will invoke fearlessness in them to be creative to present ideas, and the atmosphere will start to impact you, and you will become a more innovative team.”

His last point, but most important, was to take time to slow down or stop.

“The single best decision I think I ever made was one that I didn’t even know was a good decision when I made it,” Crosby said. “It was that time that I decided to stop and give myself some space to discover a fresh perspective, a new career opportunity.”