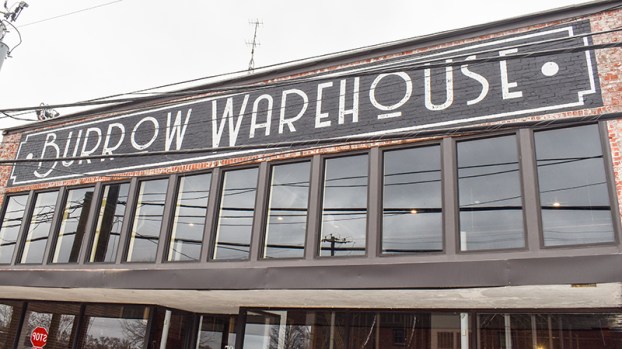 WEST POINT — While nails are still being hammered into walls at the Burrow Warehouse in West Point, Owners Michael Coniglio and Kesha Edwards-Coniglio have found a way for the West Point community to have an imprint on the business.

The Burrow Warehouse will have an online contest to name its front ballroom starting Monday on Facebook.

Edwards Coniglio said every other room in the building has a name already. The upstairs is named the Rhodes Room to reflect upon a time when the building at 709 4th St. in West Point was a Rhodes Furniture store.

On the side of the building, there will be a space with tables and chairs for lounging activity outside called The Alley.

In the back of the event venue building, there is a space with a roll-up garage that could be used for mini concerts or a small wedding reception, Edwards-Coniglio said. That space is called The Groove Yard.

However, when people first walk into The Burrow Warehouse, that space’s name will be up to the public.

“We named every other space in the venue, but we left this space unnamed,” Edwards-Coniglio said. “We’ve only live in West Point for about nine years, so we thought it would be really nice to have a contest and see what everybody in the community thought would be a great name for it.”

Starting Monday, March 16, until the following Sunday, the business will take nominations for the names on Facebook under a post detailing the contest.

The business’s Facebook page can be found under its name — Burrow Warehouse.

After Sunday, the owners will decide on their top 10 favorites. Then, there will be a contest within the community where the people can vote on their favorite name through Facebook.

The winner will be the name with the most likes.

The person with the winning nomination will get $250 of gift certificates to local businesses.

“The idea is to spur some excitement in our community and get people to go to some businesses they never knew about,” Edwards-Coniglio said.

The Burrow Warehouse is still under construction, and Edwards-Coniglio said she expects the venue to be ready by the end of April or early May.

The first event at the space will be Edwards-Coniglio’s daughter’s graduation in early May.

The venue doesn’t have events booked as of Friday, but it is taking reservations. Edwards-Coniglio said she understands it’s hard for people to visualize what the venue will look like in its current state, but she’s confident when it’s finished, business will pick up.

Several major players in Troup County gathered Friday to get a sense of where everybody stood during the few days... read more