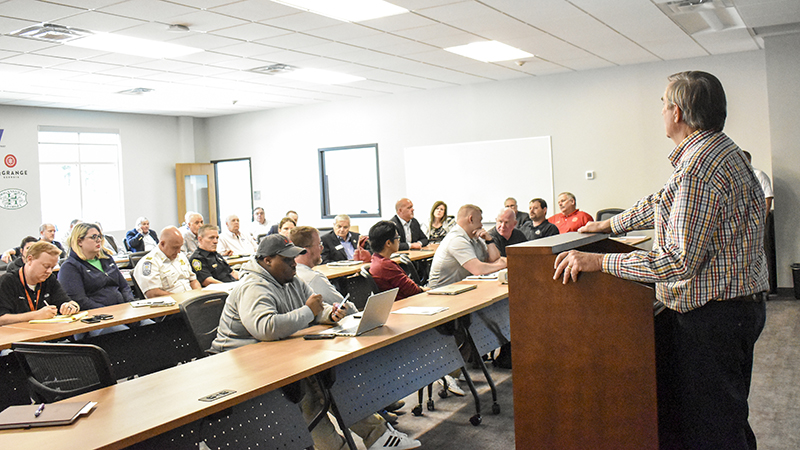 Several major players in Troup County gathered Friday to get a sense of where everybody stood during the few days of major COVID-19 announcements throughout the state.

The first topic was about what will happen with several of the government employees who may not be working after many of the closures caused by the virus.

Troup County Manager Eric Mosley said full-time county employees wouldn’t miss a paycheck, and some will work from home if they are able.

For part-time employees, he said the county would try to keep them working but possibly utilize them in different departments.

Hogansville Mayor Bill Stankiewicz said he would ask the Hogansville City Council on Monday to continue all employee’s paychecks.

LaGrange Mayor Jim Thornton echoed the sentiment that the city isn’t laying off any employees and will continue to pay staff. However, he said the city had encouraged employees not to come to work if they feel sick.

Utility payments, a large revenue driver for local cities, is a potential issue that was discussed.

“We have so many customers that will find themselves without a paycheck, so what do we with respect to utilities?” Stankiewicz asked. “I don’t know the answer to it right now, but I can tell you it will be a hardship for a lot of people.”

Thornton said LaGrange is having the conversation with the biggest issue being the continuation of water service.

“We don’t want to be in the position of cutting water off for hygiene or health,” he said. “We may have some relaxed enforcement of our debt collection practices, especially in water.”

Coleman Foss, president of WellStar West Georgia Medical Center, said the hospital isn’t laying anyone off either. He said it is doing the opposite, looking for as much help as possible.

Foss said as of 4:30 p.m. Friday, there were no cases of COVID-19 in Troup County. He said there was one case pending before Friday afternoon’s meeting, but the results came back negative. However, he said during Friday’s meeting, there were two cases under investigation. Those results were not made public Friday.

“The reality is that we are dealing with fear more than the real disease at this point,” he said. “With that being said, it could all switch at any point.”

Foss said the reality is that even the people who have gotten the coronavirus have minor symptoms, citing shortness of breath or a cough. He added that the mortality rate is very low on top of that.

He said it’s on the hospital to make sure it’s doing everything it can.

“Because the last thing we can to do is tell everybody to calm down and pump the brakes, and then something happens,” Foss said. “But the reality is we are dealing with panic and frenzy a whole lot more than a medical crisis.”

Thornton floated the idea idea of having a unified protocol in place throughout several entities in the county, just in case something does happen in Troup County.

“We need the citizens of Troup County and the cities to know that we have really smart people working on this,” Thornton said. “If we have an issue, we need to have a process in place for getting the information out to the right people. But at this point, there isn’t a need for widespread panic in the community.”

“Our biggest enemy right now is Facebook and Twitter,” he said. “If we can get a consistent message about what we all know to do during any flu virus, which is washing hands and staying the course with proper hygiene.”

“While we want to treat this very seriously, we can also overreact to a large degree,” he said.  “We are going to do what is best for our employees. That is the stance we have taken since our first day of operation.”

Miller said Kia officials are monitoring the situation hour-by-hour, and international travel by officials to and from Korea has been significantly limited.

He said the individuals that do come from Korea are pre-screened overseas, which involves a medical exam and questionnaire. When they get to the U.S., they are put into a 14-day quarantine before they are allowed to step foot on the Kia campus.

After 14 days, there is another medical exam.

Once the individual is permitted on the Kia campus, there are medical screens at the seven and 14-day periods.

“We are trying to stay as proactive as we possibly can,” Miller said.

TCSS announces it will close schools for two weeks