County leaders give update on virus 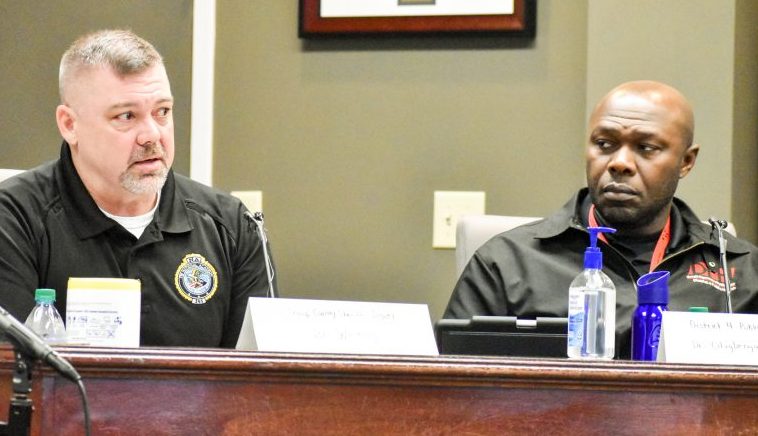 The discussion at the LaGrange City Council Chambers was streamed on Facebook Live through the city in an attempt to limit the number of visitors at city hall while also informing them.

LaGrange Mayor Jim Thornton kicked off the discussion by saying the purpose was to inform the public about what the local government is doing to respond to the virus and to let them know they are listening to the Center for Disease Control, public health professionals and state and federal entities.

“We are trying to react to that but also trying to make sure we are doing everything we can to protect the citizens of LaGrange, and Troup County and the surrounding community,” Thornton said. “That is our primary mission in all of this.”

He said the city of LaGrange is still open for business, city hall is open, garbage trucks are running and utility and road departments are working.

However, Thornton did say that until the coronavirus public health emergency is dissolved, the city will not disconnect utilities. He said the meter will continue to run during that time.

“We think those are essential services,” he said.

The CDC sent an advisory Sunday night saying it advises that for the next eight weeks, organizers cancel or postpone in-person events consisting of 50 people or more throughout the United States. Following the roundtable discussion, the White House advised that people avoid crowds of 10 or more people.

Thornton said he doesn’t have the power to prohibit private businesses from canceling their events, but he strongly encourages those business owners to listen to the CDC’s advice. He said if there is a planned event on city property, the city will contact those people to cancel it.

Dr. Olugbenga Obasanjo, director of Public Health District 4, said with each identified case, in the area, it’s the health department’s job to get in touch with every known contact of the affected person. From there, the health officials recommend how to isolate those contacts for 14 days, then monitor that social isolation.

Obasanjo said that although those individuals are identified as a contact of an affected person, there is no need to test them since they will be isolated regardless of test results.

“If we identify a known contact of a confirmed case, there is no need to test that individual,” Obasanjo said. “We know ‘person x’ has coronavirus. So as for their contacts, all we need to do is socially isolate them and watch them for 14 days.”

He said if the health department tests those people and it’s negative, it means nothing because they could be negative one day and then positive the next. Either way, that person will be isolated for 14 days.

Conversely, he said if a person is tested and they are positive, it means nothing because they are still going to be isolated for 14 days.

“There is no value in testing a known contact of a positive case,” Obasanjo said.

He said the people health professionals want to test are the ones who could spread the virus the most.

“If there is an individual to where we don’t know where or how they came into contact with coronavirus, and we think they may have COVID-19 and are spreading it, we want to identify that what they have is COVID-19 and not the flu or strep throat and then begin to identify their contacts,” Obasanjo said.

Obasanjo also talked about “flattening the curve,” which is a term used by several health officials to explain how the virus could impact the healthcare system based on the rate of new cases being confirmed.

He said flattening the curve doesn’t mean eliminating all transition, it means reducing it and spreading it out over time, lessening the impact on health professionals.

“We are probably going to have some transmission over a period of time,” Obasanjo said. “But we are trying to keep that at a level that doesn’t overwhelm (healthcare professionals).”

He said a lot of what is being done in terms of social distancing isn’t to benefit the younger generation because, in most cases, they will either not know they have the infection or experience mild symptoms. However, the elderly react differently and are at higher risk of disease and have a higher mortality rate.

“You don’t want to be exposed, then expose Nana, and then they come in and overwhelm the healthcare system,” Obasanjo said.

He said if a person does test positive for COVID-19, the current standard for them to be considered disease-free is seven days after they were identified or three days after their last symptoms, whichever is longer.

Troup County School System Superintendent Brian Shumate said as of Monday, the school system is planning to go back to school in weeks. However, he said that could change with more direction from the governor’s office and state school board.

During those two weeks, the school system will have lunch delivered to locations within the community and provide drive though services for students at select schools.

As of noon, on Monday, the CDC reported 121 cases of COVID-19 in Georgia with one death. As of press time Monday, Troup County had one confirmed case.

OUR OPINION: Do your part, and know the facts