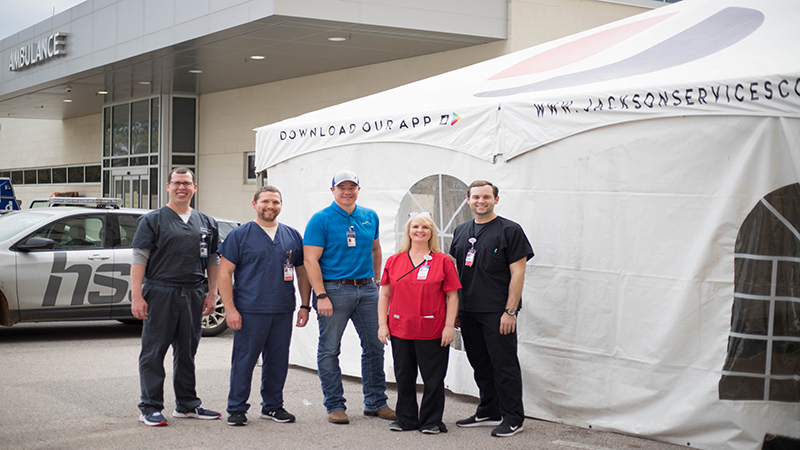 When Dale Jackson, co-owner of Jackson Services, heard on Monday that there was a need at WellStar West Georgia Medical Center for additional space in the emergency department, he sprang into action.

“We’re typically booked up with events for months in advance, but every event has gotten canceled,” Jackson said. “I thought, well, we have three tents, let’s find a way to put them to good use.”

On Tuesday afternoon, Jackson Services installed one of its tents at the hospital. The tent will allow the emergency room to see lower-acuity, non-infectious patients, who are typically seen in an urgent care setting, and will avoid exposure to COVID-19.

“We appreciate Jackson Services for their assistance to allow us additional space to expand the treatment capabilities of the emergency department,” said Veronica Hopster, RN, director of Emergency Services at WellStar West Georgia Medical Center. “This area will allow the emergency department to conserve space for patients requiring more resources.”

The area is expected to be up and running by Monday, March 23, but Hopster said they hope it can be ready sooner.

“We have to add and run electricity through it first and get the proper approval for it as well,” Hopster said.

Jackson Services is also reaching out to other hospitals in the surrounding areas to offer its tents that include air conditioning units.

“The primary purpose that it’s serving is it’s preventing patients that aren’t that sick or in that serious need, potentially having to go through the screening process and the rest of the hospital and potentially getting infected,” Jackson said. “And just adding more complications inside the hospital because of the extra CDC guidelines that everybody has to adhere to. So now, when you come into the emergency room, and it’s not serious, you can come here, it’ll be heated, it’ll be cooled and it’ll be out of the weather. This way it won’t overload the hospital.”

TCSS prepares to feed thousands of students during school…