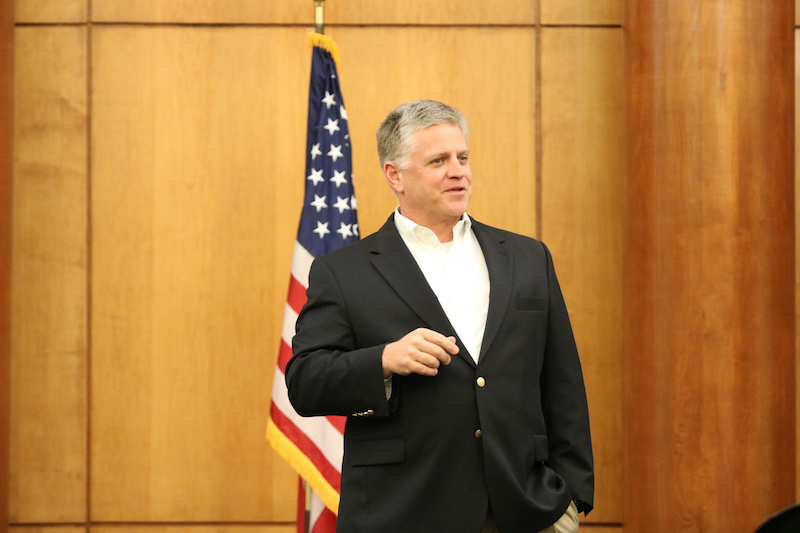 During his self-quarantine, Rep. Drew Ferguson is focusing on helping small businesses stay afloat during the coronavirus pandemic.

“No matter who I talk to from this district who owns a small business, they are deeply concerned about their ability to weather this storm,” Ferguson said. “What we have heard, and what I think you’re going to see is small businesses need liquidity. Meaning that they need cash available to carry them through this period wherein essence, they have no revenue coming in.”

Multiple restaurants in Troup County have had to close their dining room and move to curbside service or drive-thru only.

“Think about a small business owner, like a restaurant owner that has no customers coming in because the advice is that [there should be] fewer than 10 people at a time in your establishment,” Ferguson said. “They still have rent to pay, they still have business loans to pay and quite candidly, they want to take care of their employees.”

“No 1, we are working we’re working with the FDIC right now to provide guidance to banks to allow banks to have some flexibility with their loans,” Ferguson said. “This was done following Hurricane Katrina in New Orleans. It had a real impact where these businesses didn’t have to worry about those loan payments for 30, 60 or 90 days.”

According to Ferguson, the loans weren’t completely forgiven, but the businesses were given a grace period to get back on their feet.

“That part is not finalized yet, but that is a goal that we have that we think could be helpful,” Ferguson said. “No. 2, we want to make sure that they’ve got access to capital to cover rent, to cover their expenses and that’s going to be done through the (U.S.) Small Business Administration.”

As of recently, small business owners in Troup County, Georgia, and all other states are currently eligible to apply for a low-interest loan due to coronavirus. Find more information on the SBA’s Economic Injury Disaster Loans at disasterloan.sba.gov/ela/.

“Typically, the Small Business Administration loan process is very complex,” Ferguson said. “It’s slow on a good day. What we’re going to do is allow local banks to make these loans, and then those would be backed by the SBA. Ideally, we’d like to have a one-page application, and banks will be able to get the capital out to them.”

Ferguson said banks would have the assurance that they would not be impacted from a regulatory standpoint.

“Also, they would have that capital there to back these loans, in the event that some of them [the businesses] weren’t able to pay it back,” Ferguson said. “Another key component on that, and this is a provision that’s in the Senate bill right now, is that if small businesses kept their employees on payroll they can use the small business loans to cover employee costs then there’s going to be a forgiveness portion to this loan.”

The Family Medical Leave Act is also available during this virus pandemic.

“The business owner, in theory, would receive a refundable tax credit from the government into their tax account that they could then pay their employees with that to keep them on the job,” Ferguson said. “What we want to do is keep the employee and the employer connected during what we hope is a defined period that won’t last too terribly much longer.”

Ferguson has been working alongside the LaGrange-Troup Chamber of Commerce to help provide information to local businesses about loans and revenue during this time.

“We are looking at the economy as if it were a triaging patient,” Ferguson said. “What we’re trying to do is to keep it alive, so that it can recover and come back stronger.”