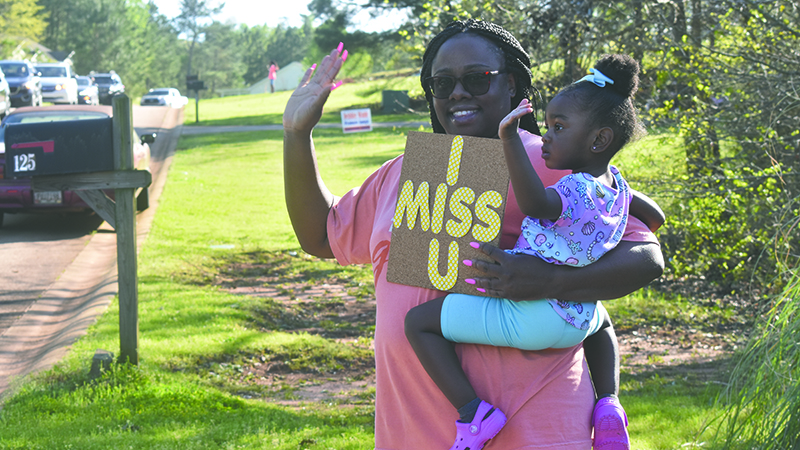 By Ed Pugh and Dustin Duncan

Teachers at Long Cane Elementary School reunited with some of their students in a unique way Wednesday.

With schools closed until April 27 due to the COVID-19 outbreak, LCES Principal Katie Brown posted on Facebook that the school was having ‘Wave on Wednesday,’ as a way for LCES teachers to see their students’ smiling faces again.

“We, at Long Cane, are always trying to come up with something to do fun for our students,” Brown said Thursday morning.

The idea came from a staff member at the school who saw schools in other states who did the same thing. Brown said the school reached out on Facebook to see if parents would be interested and got a great response. From there, they just need to craft a route and ask teachers if they wanted to be involved.

“We asked if anybody wanted to participate, and just about all of our staff showed up,” she said. “It took four hours, but we made it to everybody that wanted us to drive by.”

At 4:30 p.m. Wednesday, about 40 teachers lined their cars in front of the elementary school. Some decorated their vehicles showing the love in their hearts they have for their students as they went from neighborhood to neighborhood.

The route was led by a deputy with the Troup County Sheriff’s Department. Kids and parents lined their driveways anxiously waiting for the caravan to pass through. Some were even equipped with messages of love and support for the educators whom they spend several hours each week.

As the caravan slowly cruised past the families, horns honked, kids were yelling teachers’ names and waving at them enthusiastically.

Other families along the way heard horns honking and took a moment to come out of their homes to wave to the teachers as well.

“I have been in education for 20 years, and this was the highlight of my whole career,” Brown said. “Fabulous turnout. Families loved it, and we love them.”

Brown said the drive-by was a way to see the students and the parents after a closure of the schools by the Troup County School System Board of Education, which followed a recommendation by Gov. Brian Kemp. That order has since been extended twice, first to March 31, and most recently to April 24.

“We never had a proper way to say goodbye to our parents and the kids,” Brown said. “We never got to talk to them before we left. So, this was our way of reaching out, so they could see our faces, and we could show our love.”She said since the students have been home, she’s amazed at the ability of the school system to get work packets together quickly and the response of the students working on assignments.

Brown said each teacher at Long Cane has reached out to parents with a video conference application called Zoom. The app allows teachers to see their students and parents, so they can do experiments, answer questions and check in on their wellbeing.

She said during the first few days of the shutdown, Long Cane didn’t have anything online, and all the information was sent out in hard copy. Brown said at the end of the first day, the school only had three packets left as about 540 parents showed up to take work home.

“We are very, very goal-oriented at Long Cane, and very academically driven, and parents know that that’s very important to us,” Brown said. “And so, I think because we’ve had that understanding between parent, teacher and student that learning is important, it shows that our parents care.”

Although the assignments sent home or completed electronically aren’t graded, Brown said teachers are still holding students accountable. She said students are still working and asking questions about how to do the work.

“There’s no grade, but we’ve been shocked at how many are still participating,” Brown said.

Hogansville Elementary School announced its teachers would do a similar drive-by Thursday afternoon. Hillcrest Elementary will also do a drive-by starting at 2 p.m. on Friday.