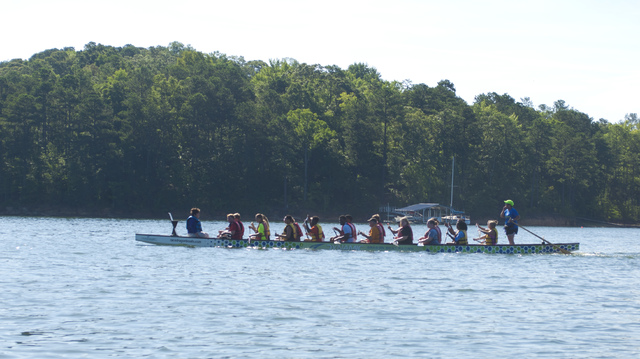 Over the past weekend, the Law Enforcement Division of the Georgia Department of Natural Recourses had to disperse multiple groups of boaters throughout the region, including West Point Lake for violating social distancing guidelines on the water.

“We had some real warm weather, and I think a lot of people had cabin fever and wanted to get out,” said Public Affairs Officer Mark McKinnon. “The lakes were really crowded this weekend, including West Point Lake. We had some people who were tied together and basically violating the social distancing directive.”

“We just had our game wardens out on the lakes patrolling and have to go up to these folks and disperse them,” McKinnon said. “We really had no trouble with that and people understood it once we educated them a little bit.”

McKinnon said that DNR is encouraging people not gather in large groups, even if it is out on the water in open air.

“We have a couple of different things that can happen,” McKinnon said. “One is especially with pontoon boats or party boats that some of the lakes have. They’re fairly large boats that you can have up to 15 to 20 people on it at a time. That is one issue that we are talking to folks about and making sure they understand that’s not something they should be doing.”

The Law Enforcement Division of DNR had to break up multiple boats that were tied to a bridge or one another.

“They were just hanging out together, and in normal circumstances that would be OK for them to tie together,” McKinnon said. “But right now, with the social distancing that we’re trying to enforce, that’s not a good idea. You’re really just too close to folks. So, we’re asking those people to disperse as well.”

The division is posting information on its social media platforms in hopes of educating the community about proper boating safety during the pandemic.

“When out on boats and such, people are still touching the same surfaces, and touching their faces,” McKinnon said. “There’s still a lot of that going on, even if it’s not an airborne issue. People need to be very careful of that.”

Since the closure of businesses and restaurants, and warmer weather, DNR has seen an increase of people on the water.

“We’re nearly two months before that. We do expect to see a few more people out on the lakes just because they want an outlet. They want to be able to escape from their home for a little bit.”

McKinnon said due to the crowds they saw over the past weekend, they will most likely step up their patrol for the coming weekends.

“Typically, this is a difficult time for us anyways,” McKinnon said. “We have turkey hunting season going on. Then we have a third thing going on with this virus, and that is a lot of our game wardens are involved in helping to deliver medical supplies around the state. They really are all split up but we’re trying to manage that and get as many on the water as we can.”