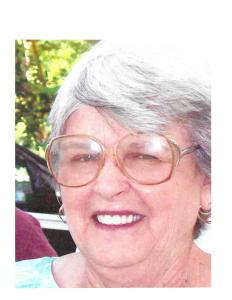 Jorene passed away at home Sunday, March 29, after a 16-year struggle with cancer. This evil disease had worn her down to the point that she had no more fight left and she wanted more than anything to “go and see my mother”. A Celebration of life will be held at a future date at the Historic Piedmont Hotel Museum in Gainesville.

Jorene was born on Sept. 13, 1943, to Joe and Helen Webb in LaGrange, and graduated from LaGrange High School. After that, she attended North Georgia College in Dahlonega, where she met her future husband Richard. After Richard’s graduation and commissioning, they were first at the Infantry School at Fort Benning, then the Army Intelligence School in Baltimore, and last a permanent assignment at the Military Police School at Fort Gordon, where first son David was born.

After the Army, the couple moved to Gainesville and got involved. Her interests included the Jaycettes, Cub Scout den mother and grade mother. Their second son Chris was born. Next, she took a few classes at Gainesville Junior College and started volunteering at the Green Street Station Museum, a predecessor of today’s Northeast Georgia History Center. Jorene was Vice President of the History Center when they moved into that grand facility they occupy today. Soon she was involved in the Hall County Historical Society, where Judge W. L. Norton recruited her as secretary of the Norton Institutes for Bankruptcy Law and as secretary of the Historical Society. At the same time, the Pilchers were deeply committed as two of the founders of the new Longstreet Society. With the LS, she worked with Judge Norton in all that went into the restoration of the Historic Piedmont Hotel, now Longstreet Society headquarters and Longstreet Museum.

She was vital to the success of the Society in its early years and in 2011, she received the prestigious Helen Dortch Longstreet Award. This award was her proudest achievement.

Genera Longstreet’s great-grandson, Dan Paterson. referred to her this week as “the first lady of the Longstreet Society”.

With her cancer diagnosis in 2004, treatments were started at the Longstreet Clinic and the Northeast Georgia Medical Center, but shortly after treatment started, she was notified that NGMC had failed to reach an agreement with Aetna, her insurance company.

With her insurance no longer accepted at Northeast Georgia, she had to turn elsewhere and settled at Atlanta Cancer Care at Northside Hospital, where she received splendid treatment for the next 15 years and made many friends. The last three weeks of her life, she received kind and gentle care at the home of NGMC Hospice. Toward the end, she enjoyed the love and attention of the bright star of her universe, three-year-old great-granddaughter Blakely Pilcher.

Those wishing to send online condolences to the family may do so at littledavenport.com