Continuing to do their jobs: Police and firefighters still respond to calls despite COVID-19 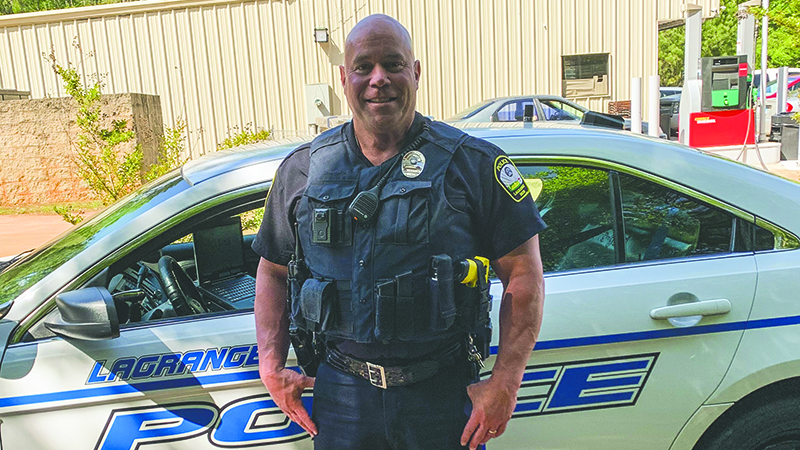 Healthcare professionals are fighting COVID-19 from inside the hospitals, but many times before patients make it to the emergency room, they are treated by a first responder.

Firefighters, paramedics and police officers are professionals that have a high contact rate with the public even during the COVID-19 pandemic.

LaGrange firefighter Lt. Caleb Harrison, who is also an EMT, said exposure is always in the back of a first responder’s mind, but it can’t affect how they do their job.

“We want to be vigilant because of the threat, but we don’t want to be so worried that we don’t fulfill our duty the way that we should,” he said.

Harrison is also the infection control officer with the LaGrange Fire Department for the past 10 years. He said the department was proactive from the moment the virus started to make its way into the country and state.

“We tried to get ahead of it pretty well, and we already had a lot of the supplies and equipment needed,” Harrison said.

He said the LFD just needed to form a plan about what they were going to wear on calls and what information was required from telecommunicators. Firefighters have full-body suits, N-95 masks and gloves to wear on every call.

Harrison said the biggest issue is cross-contamination when the suit is taken off.

“You don’t want to spread what’s potentially on that suit anywhere else,” he said.

He said he’s posted videos for staff to know how to take off the suits and how to dispose of them properly.

Firefighters already rely heavily on telecommunicators to get them the most up-to-date information possible while responding to a call. However, during COVID-19, first responders are asking those on the phone to take even more information. Telecommunicators are asking callers if they have a fever, runny nose or a cough. Harrison said many times the caller doesn’t know or can’t answer the question for somebody else.

“A runny nose or a cough is pretty common this time of year for those with seasonal allergies,” Harrison said.

However, the department still takes all necessary precautions because the virus can still be spread by those who are asymptomatic. Because of that knowledge, Harrison said the fire department isn’t getting together in groups any longer for training, they are disinfecting the stationhouses regularly and cleaning the truck every time it leaves the station.

The situation hit home for those in the department when cases started to pop up in Troup County, and the department began to run calls to those who may be infected.

“We are really trying to take the most proactive steps possible,” Harrison said. “We don’t want to get one of our guys sick, and also, none of us want to take this home to our families.”

Harrison said he knows of first responders who were sleeping in tents in the garage or in campers in the driveway.

“We have several people who have decided to isolate themselves as much as possible,” he said. “Just trying to decrease the chances of unintentionally contracting it and spreading it around.”

In law enforcement, LaGrange School Resource Officer Lane Hamer is now on patrol due to the virus.

He said each cop is wiping down their cars with alcohol before and after each shift. Anybody somebody is required to sit in the back seat, that area is cleaned immediately. When dealing with the public, Hamer said they are wearing gloves and a mask, and trying to keep six feet of distance between themselves and the public.

“But, there are times when it’s just absolutely necessary that somebody has to go jail, and you have to get close,” Hamer said. “When those times come, you just have to handle it.”

The virus is always lingering in the back of his mind when on calls, but he’s not hesitant in performing his duties.

“We can’t be hesitant because we don’t want to get ourselves hurt or get anybody else hurt,” Hamer said. “We’re in the line of work where we don’t get to really say ‘hey, you know I’m just going to stay away from this person.’ We are still doing the job we are trained to do — we’re just taking extra precautions.”

When Hamer’s shift is over, he places his vest in the same place in his home where nobody else goes. He sprays his boots with disinfectant, throws his uniform in the washer and heads straight for the shower before interacting with his family.