Instacart employees getting bait and switch tips on deliveries

Jenna Garcia spends about 50 to 60 hours a week grocery shopping in LaGrange.

She works for Instacart, an app for individuals at home to place a grocery delivery order from their mobile device through grocery stores such as Publix or Kroger. Garcia gets the notification to her phone through the application, selects the groceries on the customer’s order, drives to their house and because of COVID-19, she drops the groceries off on the person’s front porch or outside their door.

When a customer first places an order, they have the option to leave a 5 percent tip for the person delivering the groceries. This percentage can be changed to a different percentage, or the customer can write in a custom tip. However, Garcia said many people are leaving the tip at 5 percent regardless of the size of the order or leaving no tip at all. She said 5 percent isn’t a proper service industry tip, as it usually between 15 and 20 percent.

“It’s like people have forgotten that this is a service industry thing,” Garcia said.

Instacart does pay its drivers $0.60 a mile and $7 per delivery, but the rest of their income comes from tips by customers.

Garcia said there is a delivery charge added to the customer’s order, but that money isn’t given to the driver — it’s given back to the company. Additionally, since some grocery stores offer free delivery during COVID-19, people aren’t tipping at all.

According to Garcia, the average order is about 30 to 40 items and regularly more than $100. She said it takes about an hour to an hour and a half to shop, and then she routinely drive about seven to 10 miles to deliver. Instacart only pays the drivers for the drive to the house from the grocery store and not the trip back.

Garcia said when taking into account the time to shop and drive, even with the $7 paid by Instacart and mileage, if the customer doesn’t tip, she’s making about $4 to $5 an hour.

Garcia said there are several Instacart shoppers in LaGrange. When customers place orders, they are put into a queue for Instacart employees to claim. Garcia said they can see the tip amount when deciding to shop for an order, and unsurprisingly, the orders with the biggest tip usually are shopped first.

However, Garcia said a trend is happening throughout the country where customers, including a large tip when they place their order, then taking the tip away after the order is completed. This method allows them to get their order faster.

Instacart policy gives the customers three days to manipulate their tip after the order is completed.

“There are certain neighborhoods who have figured out if you put a big tip that they are more likely to get your groceries quicker because we do pick by tip amount,” Garcia said. “It’s happening nationwide at this point, but we have hot spots in LaGrange where we know this is happening.”

Garcia said she’s had orders with tips of more than $20 wiped away to zero after she’s completed the order multiple times in the past couple of weeks. 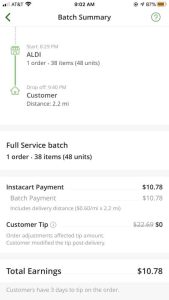 She said customers have also started to figure out if they don’t put a tip at all, their order will not be picked up.

Garcia said eventually Instacart will place a “peak boost” on an order that has been sitting in the queue for a while, which can be between $3 to $10 to entice shoppers to complete and deliver that order.

Another problem Instacart shoppers are running into is the fact customers order multiples of one item, but the grocery store is placing limits on certain items during the COVID-19 crisis.

Toilet paper, cleaning supplies and meat items have been limited in several stores throughout the country, including LaGrange.

However, Garcia says customers still get angry is a shopper is unable to fulfill the entire order regardless if it’s out of the shopper’s hands. She said the retribution usually comes in the form of a reduced tip.

Garcia gave the example of a customer requesting six orders of chicken breasts, but many grocery stores have placed limits of two or less on meat products. She said if she tries to buy more than two for a customer, the items will be taken away from her at the checkout line.

“We don’t get to just bypass that,” she said. “We also can’t make up toilet paper out of thin air or lunch meat.”

When the order is complete, and a driver is on the way to deliver the groceries, part of the job for Instacart drivers is to unload the groceries from the vehicle and drop them inside the customer’s home.

During the times of social distancing and COVID-19, many customers have opted for “no-contact” delivery, which means the driver will drop the items outside the front door and leave. Garcia said this is for the customer’s and the driver’s safety during the healthcare crisis.

However, she’s been in several situations where customers meet her outside and try to help her carry the groceries inside, or they get angry that she won’t enter their home and place the groceries on the kitchen table.

“The second dirtiest place other than the hospital right now is the grocery store, just because of the sheer number of people in there every day,” she said. “They are trying to clean like crazy, but it’s just not possible because of the traffic.”

Garcia also has noticed people using trips to the grocery store as a substitute for social gatherings. She sees parents who are bringing several children to the store or groups of friends shopping together and socializing.

“Shopping should be a solo experience, period right now,” she said.

Continuing to do their jobs: Police and firefighters still…