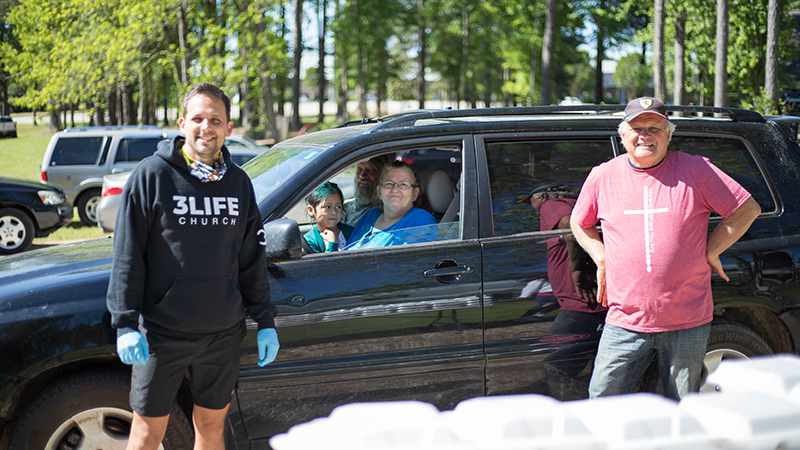 For the past few weeks, Nutwood Winery and ThreeLife Church have been able to feed thousands of locals each week.

Nutwood Winery owner Neil Liechty said that each week they have been able to successfully feed locals through donations and help from the community.

“This is unbelievable because the money comes from all over the community,” said co-owner Trish Liechty. “Anonymous donations, businesses, local people; we couldn’t do it without them. It costs about $3,000 to $4,000 a week to do this.”

Nutwood’s staff volunteers time to cook for days prior to the feeding event each week.

“Every week, we think we wouldn’t be able to do it, and we think that right now,” Trish said. “But every week someone has donated money and food so that we can.”

Neil said although they have not gotten a donation this week yet, they are still hopeful they will be able to feed another 1,000 locals in need next week.

“Last week someone gave $2,000, which allowed us to be able to feed people today,” Neil said. “We want to be responsible too, and we want to put a lot of our time into it as well. My wife was up till midnight and back up at 3 a.m. this morning cooking. Our staff has been phenomenal too. We have just been blessed.”

Local grandmother and mother Jackie Johnson has been able to feed her family each week because of the meal drive.

“This has been such a blessing for my family and has helped in so many ways,” Johnson said. “I have come through each time they have hosted this. It has made a huge impact on my family. I am picking up for 13 of my family members today.”

Local pastor and husband Rev. G.J. Smith, whose wife is undergoing cancer treatment, came through the line for the first-time last week.

“I’m doing my best to cook and help her, but quite frankly this has been such a blessing because the meal preparation and cooking is hard,” Smith said. “This is helping not just physically but spiritually as well. People, like the church here, is reaching out to so many people regardless of race or situation. When you are hungry, you are hungry, whether it be physical or spiritually. I’m thankful for this ministry here to do this.”

Smith said he hopes ThreeLife and the winery are able to continue to feed people throughout the pandemic.

Celebrity chef Pat Neely has come in throughout the past few weeks to cut hundreds of heads of cabbage to make his famous coleslaw for the meal drive, too.

Neil said some of the stories he has heard from people in line have touched his heart tremendously.

“We had a man in line who was probably around 80-years-old and his car ran out of gas,” Neil said. “He said he had maybe $4 to his name and was also trying to go to Walmart to get his prescription. The fact is there is a real world out there. This man had to choose from going to Walmart to get medicine or going hungry.”

Last week, Neil had a woman come through the line who had walked more than a mile with her three small children in a wagon to get food.

“She had just moved here four weeks ago and gotten a job,” Neil said. “But then got laid off because she was a waitress. She walked here and back with her kids so they wouldn’t go hungry. You know there’s so many people who fall between the cracks and are so limited.”

Neil said it has been the stories of people in line that have inspired him to keep going.

“This is what we are all about,” Neil said. “This is what makes LaGrange and ThreeLife Church what it is. We are here for everybody. We hope people continue to give so we can do this.”