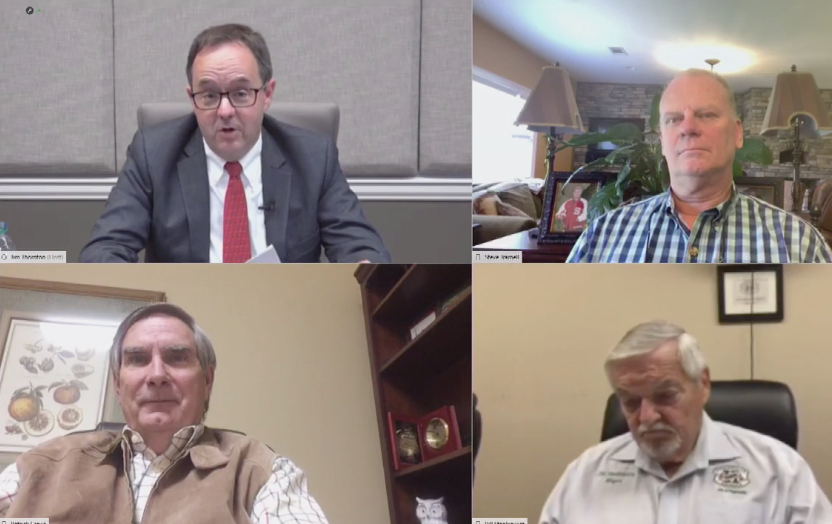 Thornton said there’s a sense the county is reaching a tipping point when it comes to new COVID-19 cases now that it isn’t seeing dramatic increases in confirmed cases. However, he was quick to point out that cases are still increasing — it’s just the number of new cases aren’t rising at high levels.

As of 11:30 a.m. on Friday, the Georgia Department of Public Health District 4 reported 78 confirmed COVID-19 cases and four deaths in Troup County.

“You’re already starting to see discussion at the federal and even at the state level about when can we reopen, and when can we get back to a sense of normalcy,” Thornton said. “I can tell you that everybody I’ve talked to wants that desperately to happen, but we just don’t want to do it too soon. We don’t want to get to a point where we overreact.”

On Thursday, U.S. President Donald Trump unveiled a three-phase approach for how the country would reopen. It was based on the severity level of states, and he left it into the hands of governors to make decisions.

“I guess we’re waiting to hear from the state in terms of where they stand with these guidelines,” Stankiewicz said.

Crews said he’s looking forward to seeing what Georgia Gov. Brian Kemp has to say about the federal guidelines, but in the meantime, Troup County residents need to continue following social distancing protocols.

“I, too, like the mayor feel we are at kind of a tipping point,” Crews said. “But we’ve gotten to this point, hopefully by making some quick moves, and by the fact that our citizens are out there cooperating.”

Tramell said that even though it seems Troup County has started to see fewer new cases each day, it doesn’t mean people need to relax.

“I’m afraid that people are going to get lax, and we don’t want to see that happening,” he said. “I’d like to see more masks. I’d like to see everybody in a mask.”

Stankiewicz said the only way he feels residents can genuinely start to feel comfortable is with universal testing.

“So that we know who has been infected and who has not been infected, and who is asymptomatic,” he said. “I think until we get a vaccine, which may be six months to a year away, we’re really not going to be able to completely go back to normal.”

Thornton said although local health officials have talked about the success of Troup County and Trump made national comments about reopening the country, Kemp’s shelter-in-place order is still in effect until April 30.

“That order that Gov. Kemp handed down has not been rescinded or relaxed in any capacity,” Thornton said.

However, the LaGrange mayor said he was proud of the fact that Troup County had strict social distancing rules in place before the governor handed down his order.

As the governor does start to ease back, which he has not made any announcement about as of Friday, Crews said local officials still need to listen to medical professionals about how to move forward.

He said Kemp has to do things that work for the entire state when it comes to restarting the economy, but local leaders need to keep in mind what will work best for Troup County.

Tramell talked about Interstate 85, which runs through Troup County, and how it brings visitors from throughout Georgia and other states. Also, he mentioned Chambers County in Alabama, which has the highest per capita occurrence of COVID-19 in that state. For a county population of about 30,000, Chambers County has 233 confirmed cases and 11 deaths as of Friday afternoon and borders Troup County.

“Regardless of what the governor does, I think we need to just remain diligent in our practices,” Tramell said.

Stankiewicz echoed Tramell’s thoughts, adding it would be a mistake to relax too soon.

The group had a consensus that Troup County will see a “new normal” after COVID-19 begins to taper off in the community.

Stankiewicz has a more cautious approach to what life could look like after the COVID-19 pandemic. As a sports fan, he said things could look very different.

“I can’t envision sitting side-by-side in the stadium with 50,000 people,” he said. “I don’t know how that’s going to work. I worry about that.”

Stankiewicz also thinks travel will be affected, and if people do travel, it could be more by vehicle than flying.

“I think that people are going to think twice about getting on an airplane for a long time to come,” he said. “Unless there are some assurances or some changes made that we can guarantee people that they’ll be safe on an airplane.”