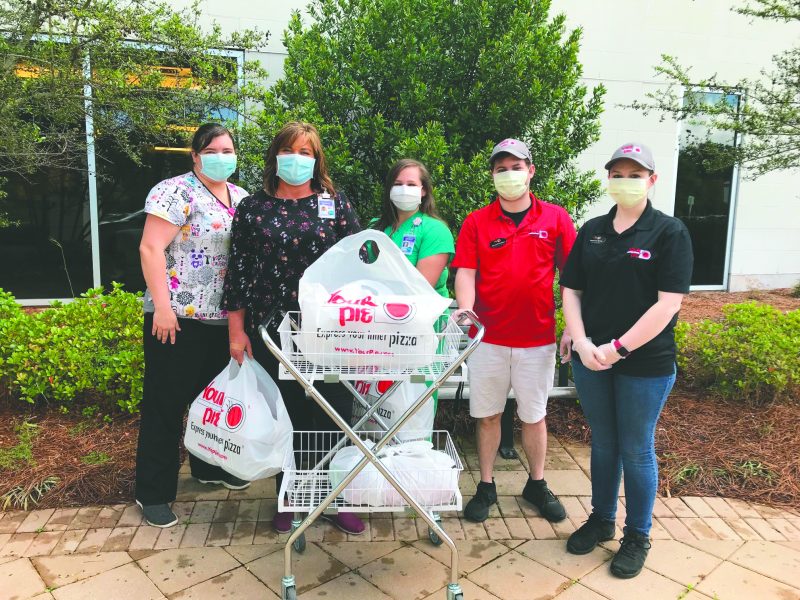 About three weeks ago, Your Pie in LaGrange received a call from an anonymous donor who wanted to feed deserving groups in the area.

Tim Thoms, co-owner of Your Pie, said that donor wanted to buy pizzas for students and families from Callaway Middle School and Franklin Forest Elementary. Thoms said the restaurant cooked about 125 individual pizzas, and then worked with other groups in the area to hand out the food.

“This kind of got us thinking that there’s an avenue where we could partner with other people that would want to fund the feeding of other people,” Thoms said.

Since the first donation, Your Pie have had three additional orders to feed other groups. First, they fed about 20 to 30 people at the Georgia Department of Public Health in LaGrange, and then the Troup County E-911 dispatching team this past Thursday and Friday.

On Monday, Thoms said the restaurant fed 18 employees from the central supply team at WellStar West Georgia Medical Center. On Tuesday, the restaurant is cooking about 40 pizzas for hospital staff on the night shift.

Thoms said the publicity for these donators doesn’t belong to Your Pie. It belongs to those who are paying for the food. And so far, none of those individuals have wanted to put their name to the donations.

However, Thoms said it is a good thing for his company. He is not coy about talking about how the COVID-19 pandemic has impacted his business.

“We’re struggling, to be honest,” he said. “We’ve been impacted hard.”

Now, Your Pie has started to reach out to other customers and businesses around LaGrange and Troup County to see if they are interested in donating and potentially doing business. Thoms said the company has been in contact with the city and county officials, as well as the LaGrange Downtown Development Authority about the best groups of people to feed and who would be the best fit to donate.

Eventually, the program could grow to include more than just Your Pie. Thoms said the LaGrange Downtown Development Authority is working to broaden the scale of the program to involve more business owners.

“We want to show the appreciation to these people that are doing the frontline work and keeping everything going,” he said. “Plus, it helps the restaurants as well.”

Thoms these donations have helped Your Pie bring more employees back to work and bring sales back.

“This won’t get us back to where we are supposed to be, but it’ll buy us some time to when things hopefully start to improve,” he said.

Bill Hunnicutt, executive director of the Downtown LaGrange Development Authority, said his organization is looking to be the vessel to provide one cohesive way for individuals to donate money.

He said the authority has opened a new bank account to keep any money donated separate from authority funds.

They are also creating a website, which should be active Tuesday, according to Hunnicutt.

He said the donations can be for more than just restaurants.

“There are retail businesses who will be able to kick in and do things like gift baskets and gift cards,” Hunnicutt said. “Essentially, it’s going to be a way for people to give money to make sure that the frontline people are fed and taken care of.”

Hunnicutt said he has formed a committee of people with someone from the city, the county, the hospital and the Georgia Department of Public Health to decide who gets the food and who is going to cook the food.

He said it will be on a schedule, so it can be dispersed evenly throughout the area.

“It’s going to have to be understood that it’s all the frontline people,” he said. “Collectively, everybody will be fed or serviced equally.”

Hunnicutt said there have been individuals who have wanted to donate specifically to firefighters or nurses, but it’s too complex to separate the money in that fashion.

Also, Hunnicutt said the measure is meant to keep the businesses running. The restaurants are providing the meals at a slight discount, but they need to still bring in revenue.

Additionally, individuals in the community have wanted to help businesses and support healthcare workers but didn’t know how.

“This way, the community puts the money in, the restaurants get to cook the food and stay in business, and the frontline people get fed,” Hunnicutt said. “It’s kind of like killing three birds with one stone.”

Local leaders walk The Thread and talk community on…