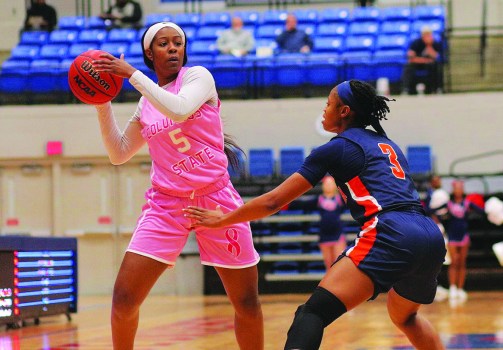 Aryan Dozier, who was a dynamic player during her time at LaGrange High, was an impact performer as a sophomore on the Columbus State University women’s basketball team.

Dozier played in 26 games for a Columbus State team that went 19-9 and reached the semifinals of the Peach Belt Conference tournament.

Dozier, who started six games, averaged 5.6 points and 4.5 rebounds per game, and she had 26 assists and 24 steals.

Dozier had one stretch where she was in double-digits in points in three straight games.

Dozier was 7-of-8 from the field against North Georgia on Feb. 12 while scoring 15 points, and she had another 15-point effort the next game against Flagler.

Against Clayton State on Feb. 19, Dozier played a season-high 37 minutes, and she was 7-of-14 from the field with 14 points.

In the final game of the season, Dozier knocked down 5-of-9 shots from the field and scored 11 points in a loss to Lander in the conference semifinals.

As a freshman at Columbus State, Dozier played in 23 games with 10 starts, and she averaged two points and 2.6 rebounds a game.

Dozier was a four-year starter at LaGrange, and she was named the Region 5-AAAA player of the year as a senior after leading the team to an unbeaten region record in the regular season.