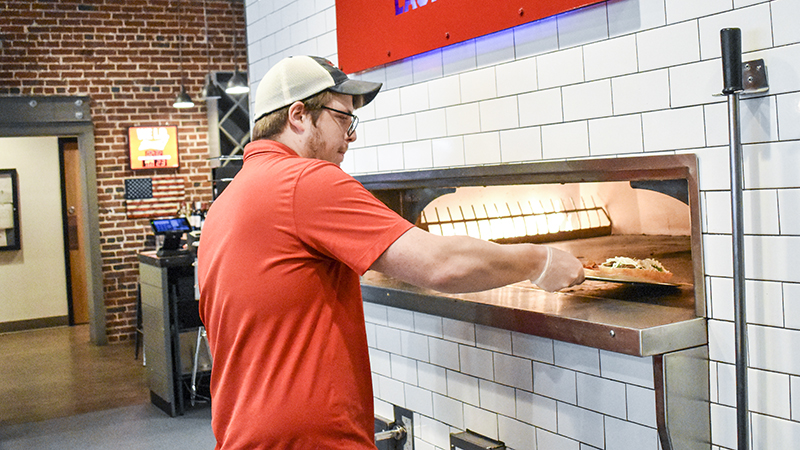 Your Pie Assistant Manager Adam Dillingham puts food into the oven Thursday. Your Pie is one of the restaurants involved in feeding healthcare employees and first responders through a website set up by the Downtown LaGrange Development Authority. — Dustin Duncan

The Downtown LaGrange Development Authority has created a website for individuals to donate money, which will, in turn, go to restaurants to cook meals specifically designated for first responders or healthcare employees.

The program is called LaGrange Community Feeds the Frontline, and the website is feeding-the-frontlines-lg.constantcontactsites.com.

According to a news release from the development authority, the contributions will be pooled with other donations from the community and used to pay for meals or surprise packages fulfilled through participating local restaurants and retailers.

The idea of the program got started when Your Pie began to receive anonymous donations to feed hospital employees and telecommunicators. Also, customers wanted to tip Your Pie for other people’s meals, but co-owner Tim Thoms said the business didn’t want to handle the money. This caused the development authority to step in and create a committee represented by someone from the city, the county, the hospital and the Georgia Department of Public Health.

The website was created by that committee, and they will decide who will cook the food and get the meals.

Bill Hunnicutt, executive director of the Downtown LaGrange Development Authority, said Thursday that the committee has talked about making the fund to feed employees indefinite.

“Even after the pandemic is over, people will still want to do something for them,” Hunnicutt said.

The committee has also requested the city of LaGrange, on behalf of local restaurants, to leave a couple of parking spots vacant in front of restaurants so they can continue to do curbside takeout.

“Just because the governor said we are opening back up, a lot of people will still be apprehensive to go places,” Hunnicutt said.

As of Thursday, Hunnicutt said there had been more than $1,000 in donations to the website.

“There was a reason we needed to do it,” he said. “There were a lot of people who said they want to help.”

There’s no plan in place as to what group will receive the meal as of Thursday, but Hunnicutt said the committee plans to meet soon. He said each meal typically costs between $10 and $12, and they are trying to keep the groups between 20 to 40 people.

When individuals log on to the website, they can click on the store tab, and it will bring them to a page to buy a meal for one at $10 or a meal for two at $25. There is also a tab for a surprise package at $25. Customers can purchase as much as they want.

“This is a great way to know that your money is going where you want it to go,” Hunnicutt said. “Every single penny given to us is going to feed people.”

He said a separate account has been created within the development authority for those funds, and its exclusive use is for feeding the employees.