Gyms, hair and nail salons ready to open for business again on Friday 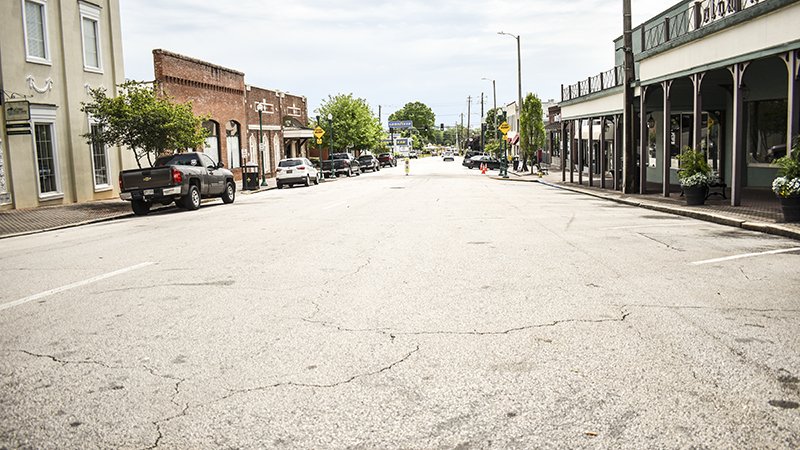 A section of Bull Street in downtown LaGrange is empty during lunch time on Thursday afternoon. — Dustin Duncan

Some businesses ordered to close by Gov. Brian Kemp at the beginning of the month will start operating again on Friday but with some guidelines attached.

Kemp announced that gyms, hair salons, bowling alleys and tattoo parlors are among businesses that may reopen Friday. However, those businesses must follow strict social distancing and hygiene requirements. Such requirements include screening workers for illnesses, enhancing sanitation at the workplace, providing personal protective equipment and increasing physical space. There is a list of 20 rules businesses must follow, according to Kemp’s office.

Multiple hair and nail salons in Troup County announced they would be open for business Friday. Others have said they don’t have enough time to clean their establishments before they can open but will be open early next week.

Although the local economy is starting to rev back up in Troup County, local leaders are still asking residents to be safe.

“Just because they are open, it doesn’t mean you have to be out on the first day and be the first one in line,” West Point Mayor Steve Tramell said. “Please wear your mask and be washing your hands repeatedly.”

He said it’s still a fact that asymptotic people can carry and spread the COVID-19 virus.

“It’s important that we are careful,” Tramell said. “We don’t want the numbers shooting back up.”

LaGrange Mayor Jim Thornton said that as the businesses begin to open, the governor’s shelter-in-place order is still in effect until April 30. He said people should venture out only to go to work or to those businesses that have reopened.

“This is not “back to normal” by any stretch,” Thornton said. “We expect businesses to have lots of limitations and protocols in place as per the governor’s minimum operations order.”

He added that medically vulnerable individuals should continue to stay home, and everyone should take safety and distancing precautions.

Troup County Board of Commissioners Chairman Patrick Crews said he believes most people in the county are going to be apprehensive about being around a lot of other people.

“Whether you agree or disagree with the governor and his decision… I am still begging our folks to follow safe practices,” Crews said. “Be personally responsible.”

He said just because the governor allowed certain businesses to open — it doesn’t mean it’s a green light for everyone to flood local businesses.

“I’m afraid that people heard the governor’s statements and saw the light flip from off to on,” Crews said. “That’s not the case. It is not a total green light. There are 20 best practices and rules that go with that.”

Kemp’s decision to reopen the state’s economy has come under fire from many national media outlets and federal politicians.

U.S. President Donald Trump said Wednesday that he “disagrees strongly” with Kemp’s decision to open certain facilities, but at the same time, said Kemp “must do what he thinks is right.”

“I want him to do what he thinks is right,” Trump said. “But I disagree with what he’s doing.”

The president’s comments come a day after he called Kemp a “very capable man.” He said Kemp knows what he is doing and has done a good job as the Georgia governor.

On Wednesday, Trump said he wants local governors to make their own decision, and if he sees something out of line, he’ll look at it.

The White House released a set of phased guidelines last week for reopening the U.S. economy based on the severity of the state.

Trump said the opening of spas, beauty salons and barbershops in Phase I is too soon, adding that he loves the people who use those facilities, but they can wait a little longer.

“Because safety has to predominate,” Trump said. “So, I told the governor very simply that I disagree with his decision, but he has to do what he thinks is right.”

During Trump’s news conference, he said there are no hard feeling between him and Kemp, adding that he campaigned for Kemp when he ran for governor in 2018.

Kemp responded about an hour later on Twitter, saying he discussed the plan to reopen shuttered businesses with Trump.

“I appreciate his bold leadership and insight during these difficult times and the framework provided by the White House to safely move states forward,” Kemp’s tweet said. “Our next measured step is driven by data and guided by state public health officials. We will continue with this approach to protect the lives — and livelihoods — of all Georgians.

“Just like the thousands of businesses currently operating throughout Georgia, I am confident that business owners who decide to reopen will adhere to Minimum Basic Operations, which prioritize the health and well-being of employees and customers.”

Crews said much of the national narrative has been negative toward Georgia but seems to ignore other states such as South Carolina, Tennessee and Texas.

“I was very disappointed that the president reversed his decision in such a short period of time,” he said. “Georgia didn’t act independently. There are others doing the same thing.”

He said he’s still “very cautious” about what the governor has done.

“I personally would have probably handled it differently,” Crews said. “I know he has to think about the whole state. I would still lean on what our public health officials have to say.”

Tramell said he would have been fine with the state waiting a bit longer to reopen as well.

“I would have like to have another week under our belt,” he said. “But, I do understand there are a lot of business owners that are hurting and need to get back to work.”

As of Thursday, Troup County had 115 confirmed COVID-19 cases and four deaths, according to the Georgia Department of Public Health. Statewide, there were 21,102 confirmed cases and 872 deaths.