Georgia restaurants can start serving in dine-in customers Monday, but it appears most Troup County residents do not feel comfortable dining in right now.

More than four-fifths — 80.8 percent — of Troup County residents said they do not plan to dine-in at a restaurant in the next few weeks, according to an online survey conducted by The LaGrange Daily News. A total of 791 people had responded to the survey by press time, which is a little more than 1 percent of Troup County’s population.

There were 12 questions included in the survey, which did not ask for any identifying information. Only one of the 12 questions was required, asking if the respondent works or lives in Troup County. To deter anyone outside from Troup County from taking part, no option was given for a non-Troup County resident.

Here’s a closer look at the responses: 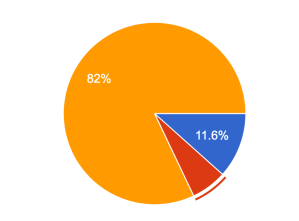 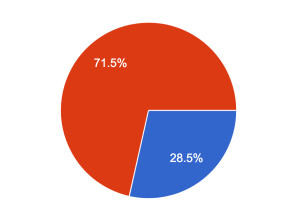 Have you or your spouse (if applicable) lost their job or been furloughed during the COVID-19 crisis?
Red- No
Blue – Yes

According to the results, a little over one-fourth of survey takers have seen an impact on their income via less work. Survey takers were specifically asked if they or their spouse had lost their job or been furloughed during the COVID-19 crisis. A total of 28.5 percent of responses were “yes.” The majority of responses, or 71.5 percent, were no.

However, most people have had their job impacted in other ways. Most people who responded to the survey — or 33.4 percent — said they are not working. But survey takers who are working were split on how they are performing their job duties.

Most responses, or 28.5 percent, said that they were working from their office. However, 27.9 percent of people said they are working at home. One-tenth, or 10.2 percent, of the responses said they were splitting time between their home and office.

It’s clear that the majority of people in Troup County have a lot of concern about COVID-19.

As expected, most of the people who responded to the survey did not have a family member diagnosed with COVID-19. A total of 55 responses said yes, which is 7 percent.

As of Friday morning, Troup County had 118 confirmed cases and four deaths, according to the Georgia Department of Public Health.

Going out in public 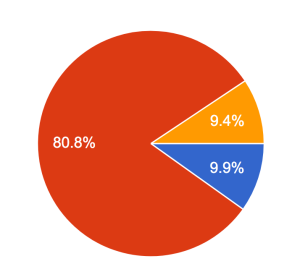 Gov. Brian Kemp announced that restaurants can offer dining in services starting Monday. Do you plan to dine in at a restaurant in the next few weeks?
Red-No
Blue -Yes
Orange -Maybe

Seventy percent said they disagree with Gov. Brian Kemp’s decision to let the statewide shelter-in-place order expire at the end of April.

The survey also asked respondents to rank local government’s response to the COVID-19 pandemic in a one to ten ranking, with one being worst and ten being best. The survey did not ask specifically about local governments and instead grouped them together under this one question.

Some of the final questions on the survey asked about moving forward. 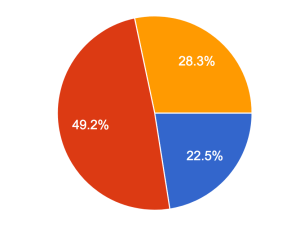 With the information you know today, do you believe you will feel comfortable attending a sporting event, concert or similar event at some point in 2020?
Red-no
Blue -yes
Orange-maybe

Almost half of the survey takers, or 49.2 percent, said they do not believe they’ll feel comfortable attending a sporting event, concert or similar event at some point in 2020. A total of 28.3 percent of people responded “maybe,” and 22.5 percent said they would feel comfortable.

Most people, or 36 percent, who responded to the survey, believe that life will return to normal by the end of summer. The second most popular answer was “by the end of 2020,” with 27.9 percent of responses marking that answer. A fourth, or 25 percent, said they don’t see life returning to normal until sometime in 2021 or beyond.

A smaller number of answers, 11 percent, said they see life returning to normal in the next few weeks.