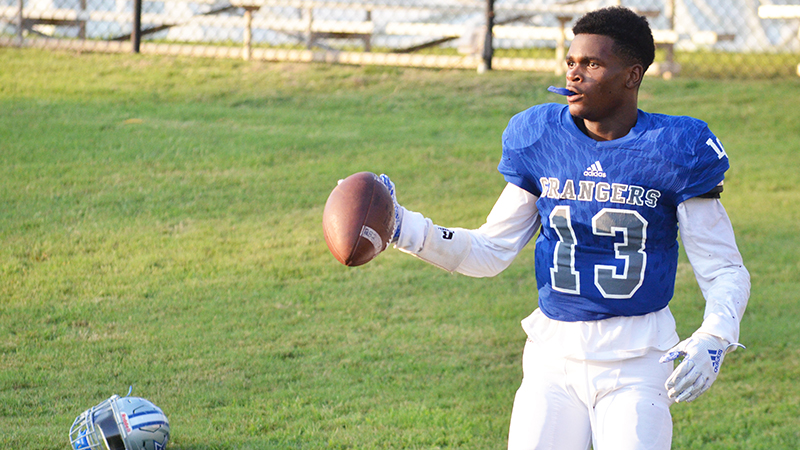 For a team that struggled to find success, it was a shining moment during a difficult season.

In an early-season game against Hampton at Callaway Stadium last fall, the LaGrange Grangers found themselves in a dogfight.

The Grangers held on for a hard-fought 18-14 win on that September night, and if not for the contributions of senior Dylan Norvell, the outcome likely would have been a different one.

Norvell had a touchdown catch from Charles Crawford, and he also made a leaping, one-handed interception in the fourth quarter in the end zone, keeping Hampton from taking the lead.

After his interception, Norvell sprinted off the field, wind-milling his arms and celebrating with his jubilant teammates.

“He was a guy that always brought positive energy,” said Chuck Gibbs, Norvell’s head coach at LaGrange. “He’d challenge coaches and players in practice when we were marginal. He always wanted to see us reach our potential, which I personally don’t think we ever did. And he struggled with it. He’s a competitor, and he’s a fiery guy, and he wouldn’t back down from anybody.”

Tragically, Norvell died following a traffic accident in Louisville, Kentucky, this past week.

Norvell was a passenger in a vehicle that struck an ambulance head-on, and he died that same day.

When the sad news arrived in LaGrange, it was a painful blow to those who knew him and loved him, including his head coach during the 2018 and 2019 football seasons.

Gibbs reflected on a moment late in the season when Norvell, who was initially suspended for the final game of his high-school career after being involved in an incident in the previous week’s game, delivered an impassioned message to his teammates.

“He talked to the seniors, and it was as authentic and heartfelt, and remorseful, and as humble as anything I think I’ve ever witnessed from a young man who’s been through so much in life and has dealt with so much adversity,” Gibbs said.

The seniors unanimously agreed that Norvell should play in that final game, and he was on the field when LaGrange closed its season with a 15-7 loss to Shaw.

Gibbs recalls the conversation he had with Norvell in the days leading up to that Shaw game, and he was so proud of how he dealt with a difficult situation.

“We talked about how important it is not just to have faith, but live it out, and let other people see God’s light shine through your light,” Gibbs said. “In that moment, he was my hero.”

Senior Andraka Martin, a linebacker and running back for the Grangers, was in the room when Norvell addressed his teammates.

“That was a very proud moment,” he said. “He had off-the-field issues, but he opened up to the whole team. That was a special moment for all of us.”

Martin said Novell always gave his all at every turn.

“He wanted you to be the best in everything you did,” he said.

Martin also said that Norvell was always ready and willing to help anyone in need.

“That was the type of guy he was,” Martin said. “Dylan, he wanted to make sure his family was straight, and he’d do anything for anybody.”

Dexter Fitzpatrick, who is a freshman football player at Mars Hill University in North Carolina, was a teammate of Norvell’s for three seasons at LaGrange High.

“We used to compete a lot,” Fitzpatrick said. “He used to be on scout offense, and I was on defense, so we’d compete and go after each other.”

Fitzpatrick, a linebacker who had a phenomenal freshman season and was Mars Hill’s leading tackler, credits Norvell for helping him become the player he is.

“Dylan, there aren’t many people like him,” Fitzpatrick said. “He’ll tell you how it is, or if you need to pick up the slack. You don’t really run across many people like that. It was a blessing to be able to meet Dylan and share my high-school experience with Dylan. I learned a lot from Dylan.”

Fitzpatrick said Norvell’s influence on him extended beyond the football field and into the classroom.

“We were in the same Spanish class,” Fitzpatrick said. “I remember one time me and Dylan used to always act up, and he came to me and said Dexter, we’ve got to stop this because we’ve got to go somewhere (after high school). It’s heartbreaking, really. You don’t meet a lot of people like Dylan.”

D.J. Burks was a close friend of Norvell’s, and they were teammates on the football team during the 2016 and 2017 seasons.

“He was always a leader on and off the field,” Burks said. “He loved everybody. He worked hard in everything he did. He was just a great athlete and a great person to everybody.”

Norvell was a playmaker in football, and he had nearly 30 catches throughout the past two seasons combined while also contributing on defense.

Norvell was a track-and-field standout as well, and he qualified for the state sectionals in the 100-meter run and the 200-meter run as a sophomore.

Whether it was football or track and field, Norvell was an unrelenting competitor who never let his slight stature keep him from making plays.

“He was a little guy, 156 pounds, but man he played physical,” Gibbs said.

While Norvell achieved excellence on the football field and the track, Burks said his friend was also compassionate, and he would “give you the shirt off his back.”

“Anything you’d ask for, he’d give it up with no hesitation,” said Burks, a basketball standout who has signed an athletic scholarship with Florida College. “That’s how much care he had for people.”

Norvell transferred to Callaway High for the final semester of his senior year, and he was on track to graduate this spring.

Burks is hopeful that at some point, those who knew Norvell and were impacted by him will be able to join together to celebrate his life, something that isn’t possible at the moment.

“We’re going to get together at one point,” Burks said. “It’s just unreal. It just hit everybody so hard. It’s just devastating.”