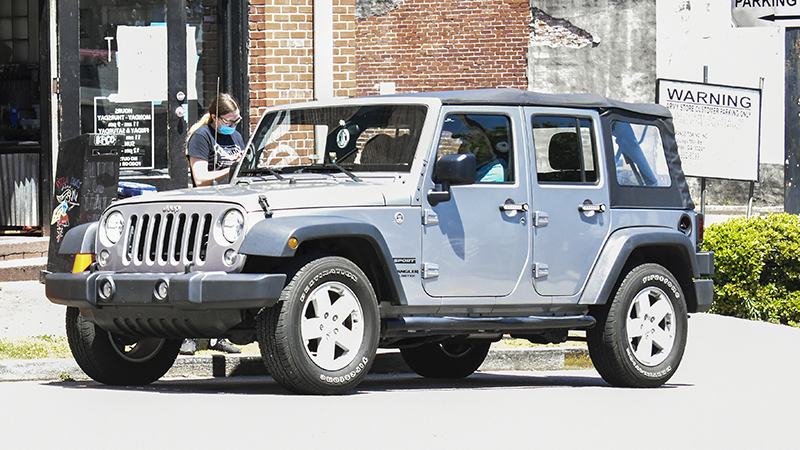 An employee of Karvelas Pizza Company in LaGrange takes a curbside order Monday afternoon. An executive order by Georgia Gov. Brian Kemp allowed restaurants to offer limited dine-in services with several restrictions. A few local restaurants in downtown LaGrange announced their plans to open but not until potentially the end of the week.

LaGrange Mayor Jim Thornton, West Point Mayor Steve Tramell, Hogansville Mayor Bill Stankiewicz and Troup County Board of Commissioners Chairman Patrick Crews were sure to remind residents that the governor’s shelter-in-place order remains in effect until April 30. They also said the order for the medically vulnerable population remains in effect until May 13.

The city of LaGrange consolidated the governor’s 26-page executive order containing regulations for those businesses down to a four-page document. Thornton said it seems the governor is mostly interested in starting a gradual process of opening businesses but not entirely opening the state.

“I think he is trying to begin a reopening process that will take several weeks to happen,” he said. “But it looks like his primary emphasis right now is trying to reopen businesses and get the economy going, but he would like people to avoid social and recreational activities.”

Tramell said some restaurants were still on the fence if they wanted to open for business or not. He said some have definitively said they aren’t opening for dine-in services, and others said they would. Tramell also said some establishments don’t have enough space to make it worth being open. Kemp’s order says a business can have 10 customers for every 500 square feet of dining space.

Tramell said servers would be required to wear masks while taking orders and disposable menus have been encouraged by the state.

Thornton said several restaurants in LaGrange said they would stay as take-out and curbside only. He said he’s heard it’s because of the difficulty of complying with the rules and if opening to the public right now is the best thing to do.

“They are asking if it is really safe. Maybe the better and safer option is to stay curbside,” he said.

Thornton said other restaurants are delaying the opening process.

“I’ve seen a few say they aren’t opening until Friday of this week or until next week,” he said. “They are taking time to sanitize everything, get their equipment in order, train their employees on some of these things. To me, that seems like our business owners acting very responsibly and something they should be commended for.”

Crews said the slow step into businesses reopening would give the public a chance to see what a new normal could look like.

“I think that this will give us a path to slowly get back into normalcy,” he said. “I appreciate those business owners who have put a lot of thought into it.

“I know it is challenging, and I know they are looking into how to do business but yet figure out how to be safe.”

Stankiewicz thought the governor made a mistake by issuing the guidelines about how to reopen too close to when they were able to open. He said the order should have been published much further in advance.

“The order was signed at 5:51 p.m. on Thursday, and businesses were allowed to open on Friday,” he said. “I think a wiser course would have been to issue the guidelines of this order well in advance of putting them in place.”

Another change that comes with Kemp’s latest order is that local law enforcement now can issue citations for those in violation, according to Tramell. He said they can cite a business twice before taking further action.

However, Tramell said he hasn’t had to take any enforcement action in West Point.

In LaGrange, Thornton said there had been calls concerning violations, but after an offer explains the order, the city has seen voluntary compliance.

“Compliments to our business owners that they have been trying their best to follow these rules,” Thornton said. “To some extent, I think we need to remind our citizens to try and follow the rules. It’s a two-way street. The business owners can do some, and the citizens who are patronizing those businesses can comply as well.”

Students give back through video game tournament