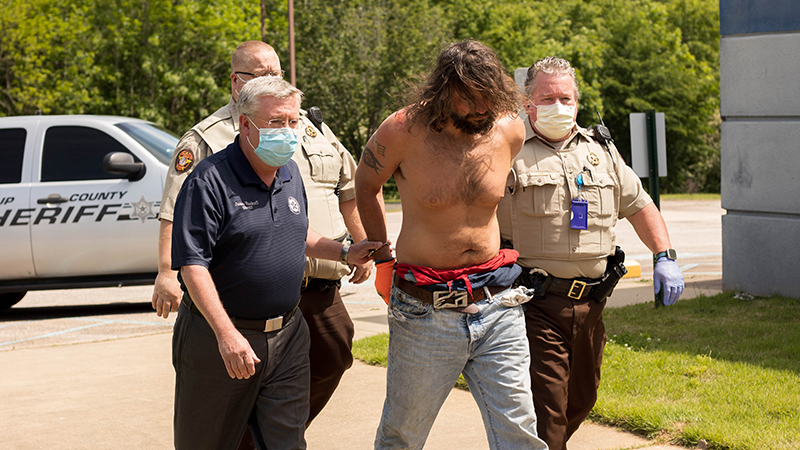 Kenneth Staples is in custody after being arrested in Troup County. At approximately noon, Staples was arrested on a grand larceny charge by the LaGrange Police Department and Troup County Sheriff’s office on New Franklin Road in LaGrange.

According to a press release from the Clifton Forge Police Department, Staples is a person of interest in the suspicious death of 41-year-old William Brandon Wright. Staples will be held awaiting extradition and questioning by local law enforcement officials.

A LaGrange man is wanted for questioning in a suspicious death investigation in Clifton Forge, Virginia.

Kenneth Staples, 41, has been identified as a person of interest in the death of William Brandon Wright, 41, of Clifton Forge, according to the Clifton Forge Police Department.

At about 1:30 a.m. on Tuesday, the Clifton Forge Police Department responded to a residence for a wellbeing check. When they arrived, they found a male lying on the floor through the window with apparent head trauma. After making forcible entry into the dwelling, they learned the man was dead.

“He’s in the stolen vehicle of the deceased individual, so at this time, that leads us to believe he is somebody we want to do talk to,” Nicely said during a news conference live-streamed by The Alleghany Journal in Virginia.

He said that is the only connection between the two individuals authorities in Virginia know about at this time.

Clifton Forge Police Chief Chad Wickline said the victim of the homicide was a resident of Clifton Forge at this time, but the suspect is not.

Nicely said Stapes is no longer in the Virginia area and is believed to be headed to Georgia.

At about 3:30 a.m., Nicely said Staples was spotted in South Carolina getting fuel.

He said Staples stopped at a gas station and asked another person to use their phone to try and get gas money.

There is an active warrant for Staples for grand larceny for the theft of the truck. Authorities in Virginia wouldn’t comment on if Staples was an official suspect Tuesday morning, just that he was wanted for questioning.

“We just have the warrant for grand larceny, and that’s all we can comment on at this time,” Nicely said during the press conference.

If anybody has any information, they are encouraged to call the Alleghany, Virginia Sheriff’s Office at (540) 965-1770, ext 1 and speak with Investigator Ledford.