Woodruff and Bolt to face off in sheriff’s race 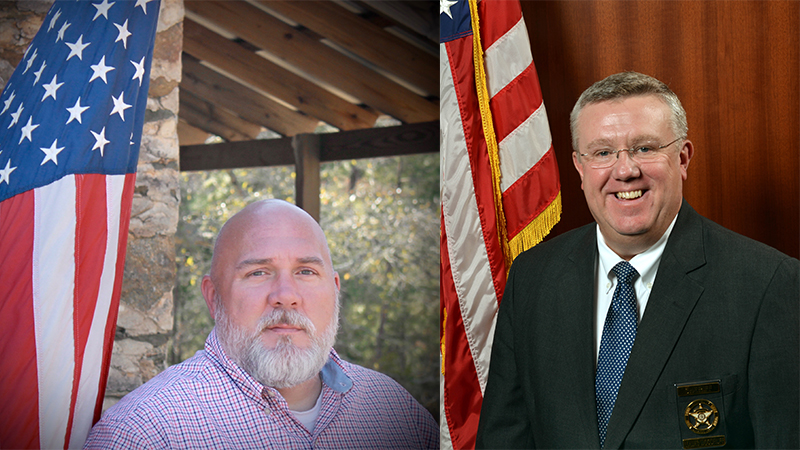 Troup County Sheriff James Woodruff will face off with Jeremy Bolt in the Republican Primary election in June.

Ricky Ward will face the winner in November’s election. Ward is the only democrat on the ballot for sheriff.

Woodruff, who has served as sheriff since 2012, said he wants to run for a third term because there is more to accomplish.

“One thing that I am very proud of that we recently did was the visitation room for children, that are in DFACS custody, while their parents are in jail,” Woodruff said. “Another big thing that we just did, because of the coronavirus situation, is Judge Michael Key is going to use video monitoring for people that are in jail, with children in DFACS custody, for status hearings.”

He also added that he and his staff have accomplished turning over tax collection duties to the tax commissioner’s office, removing the automated phone system at the sheriff’s office, restoring the Junior Deputy Program for all third grades in the Troup County School System, and restoring the Law Enforcement Explorer Program.

“We have been able to accomplish so much, not so much me personally, but me and the team that I’m so blessed to work with,” Woodruff said. “I just think I have more to offer Troup County.”

Woodruff said when he was first elected, he went to sheriff’s school that taught him to surround yourself with people that you trust with your life.

“Understanding that some of those people are going to be smarter than you, in certain areas, and you do not need to be intimidated by them,” Woodruff said. “You let them do the job. That is what I have got, a group of people that are very good at what they do and work very well together.”

When it comes to facing challenges and adversity at TCSO, Woodruff said he is capable of adjusting.

“I am always having to adjust,” Woodruff said. “We met this morning the with superior court judge, state court judge and the magistrate court judge, about how we’re going to handle court when it starts back up. We were all in the jury assembly moving chairs six feet apart, and looking at how we are going to get our screeners at the medical detector to take their temperature. Things like that, that are unforeseen and things that you are always having to tweak is something we are faced with but can handle.”

Woodruff said one major thing he hopes to continue is reaching the youth.

“I will continue to find ways to reach them before they make bad decisions, or following crime, drug use and, or gang affiliation,” Woodruff said.

Bolt, who is a Troup County native, said he has always admired law enforcement since he was a child.

“Going back to when I was a kid and seeing the involvement that patrol deputies had in the neighborhoods, they were visible, you know who they were, they knew who you were, they interacted with you and you didn’t have the crime you do now,” Bolt said. “That starts from the top. That is from the sheriff down, and for so many years it’s just got away from the grassroots. It’s gotten away from deputies in the communities, where everyone knows what’s going on with the good guys and the bad.”

Bolt said he wants to change the direction of Troup County and not make it so political.

“We have property crimes through the roof,” Bolt said. “I get questions all the time from the citizens, ‘what do I have to do to get a deputy to ride through my neighborhood?’ Or if they are the victim of a crime why does an investigator not follow up with them or cases not being closed. I want to get that involvement back with the community.”

Bolt said he preferred not to disclose which agency he works at now, due to political concerns.

In his 13-year law enforcement career, he said he has averaged 40 hours of training each year.

“The guys and girls out there at the sheriff’s office should be told they are appreciated,” Bolt said. “When I first started at TCSO, I was looking at ideas to make my shift, and ultimately when I run the jail, to make it better to work at. I had one officer tell me a simple thank you goes a long way.”

Bolt said if elected he wants to go back to implementing the D.A.R.E program in intermediate schools.

“Young people will be influenced by one or two things, a positive route or going negative route,” Bolt said. “Putting those programs back in those schools warns them of the dangers of gangs, drugs or social media. It starts with the youth, and that would be my first goal.”

Bolt said he also hopes to implement safe driving courses for teenagers in the community.

“I hope to be positive in anything I do,” Bolt said. “I have never had someone work for me, I have always had them work with me. I want the employees of Troup County to know that. And then I want the citizens to know that I truly have their best interest at heart. It all starts with me, and it’s time for a change. It’s time for a new direction in Troup County.”