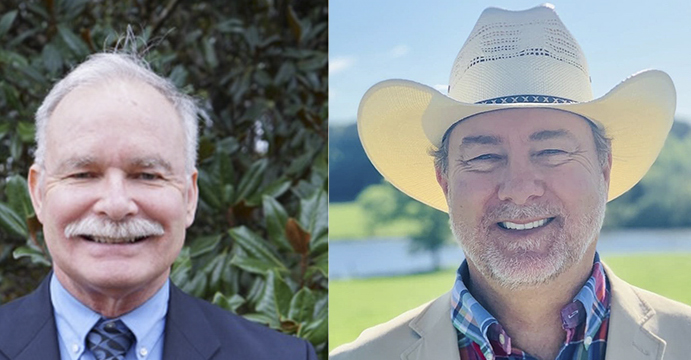 Sees Of the four seats being contested for the Troup County School Board of Education, only one seat is guaranteed to have a new member.

The TCSS District 2 race features Frank Barnes, an educator with 38 years of experience, and Ferrell Blair, a local cattle farmer and investor in Troup County.

One of the two candidates will have a seat on the board of education following the June 9 election. Current District 2 Member and Board Chairman Kirk Hancock is not running for re-election.

Barnes is no stranger to education with 38 years as a classroom teacher across seven school districts and 20 years on the sidelines as a coach. He’s also a minister at Bartley Road Church of Christ in LaGrange. He said his experience will guide his decisions and make him qualified to represent District 2. He is also a member of the Tax Relief and Comprehensive Education Reform group.

“I’ve had a variety of experiences and longevity to know a lot of things about the classroom that other people wouldn’t, unless you’ve been in the classroom,” Barnes said. “You can read about it, and people talk about it, but until you’ve lived it  — it’s not quite the same.”

Blair said he was born and raised in the Rosemont community. He’s been married for 27 years and raised two children through the Troup County School System. He added that he and his wife had been involved in the school system for more than 20 years by volunteering and helping schools and teachers.

Barnes said his platform consists of 14 points he plans to address during his time on the board. He says the platforms’ needs are what was stressed to him by teachers and taxpayers in Troup County.

Top on that list is the renovation of certain schools. He said Rosemont and Clearview Elementary Schools need repairs. Barnes said Rosement Elementary needs an expansion of its parking lot and lunchroom, and Clearview has cracks in its walls and a leaky roof.

“Those things need to be repaired to prevent mold, which is a safety and health issue,” he said.

Blair said he would like to see the board of education continue to build upon community involvement. He said for several years, the board didn’t involve the community or work with partners, and although the situation is changing with new leadership in Superintendent Brian Shumate, things could be better.

Blair talked about getting industries and the community involved with the school board and inside the classroom to build relationships.

“Not just a person with a suit and a PowerPoint presentation, but actually going in and talking to children to establish relationships and let them know the community supports them,” Blair said. “That is going to make a big difference with a lot of kid’s lives because they need mentorship. And the teachers can only do so much.”

Both candidates talked about the need to support teachers with the resources to perform their job at the highest level.

Blair would like to see community investment for teachers to help them get supplies for the classroom rather than increasing district costs and forcing teachers to have to come before the board. Additionally, he said it would cut down on the time it takes to get those requests approved due to bureaucracy’s slow process.

Barnes said a needs-based budget is a way to get essential supplies into the teacher’s hands, meaning paying the bills in the district that are necessary before spending funds on non-essential line items. He said throughout the past five years, the overwhelming amount of budgeted costs have gone to transportation, administration and operations instead of classroom teachers.

“My idea is that you invert it,” Barnes said. “Why are we paying for non-essential non-instructional things first, and not in the classroom?”

He said the process isn’t going to be easy, but the district needs to focus on the good teachers and students it has.

“We just need to focus on the things that are important, and that brings about the end result that we want,” he said.

Another top priority for Barnes is discipline in the classroom.

“I would like to see order restored in the classroom,” he said. “I believe in personal responsibility.”

He said he would like to see a policy where when a student disrupts a classroom, the teachers and administrators contact the parent immediately. He said this would make the parent aware so the problem doesn’t blindside them, and the school would be able to intervene.

Barnes said the policy needs to be flexible enough to work at each school so the teacher can teach and the student can learn.

“Unless that’s accomplished, we’re not going to see dramatic test score increases. We’re going to see a bump every now and then, and then it’s going to sink back,” he said. “I’m happy that we showed some improvement, but I fear it’s just temporary, and unless the structural changes for the classroom for the teacher take place, it will be short-lived.”

Blair said he was interested in expanding the pathways programs for students. He said the more students are exposed to new professions and ideas, the more of a chance they have to garner different interests. He said if a student sees how a profession works outside of a textbook, they may be more motivated to obtain it.

“It also helps because we would have the right people working toward the right jobs that they are fitted for,” Blair said.

He said he would like to see more students job shadowing professionals in the field, and if elected, would call upon industries to allow students into the workplace.

The board passed a resolution in January to provide some tax relief for senior citizens. The resolution would eliminate taxes for anyone 65 and older, who earn less than $40,000 a year or have a home valued at less than $100,000. According to then-TCSS Interim Chief Financial Officer Don Miller, the measure would have a $1,751,970 impact on the school system, based on figures in January. Miller said the proposal would affect about 2,500 seniors in Troup County.

The tax relief issue will be on the general election ballot in November.

Blair said he is neutral on the tax relief issue, but he wants to help the elderly who are in need.

He said the board has already started to work on balancing its current budget with a $2.2 million reduction in force policy adopted in April. He said nobody will know how much the tax relief will affect the school system’s income because there is no way to precisely quantify how many people will be eligible for the program until it is passed.

Moreover, Blair said that by the time those numbers begin to impact the school system, it would be ready for it. He said the uncertainly in funding at the state level due to COVID-19 is a bigger issue.

Barnes, who is a supporter of complete tax relief for seniors, said the district should be able to cover the loss of income by using its contingency fund. He said he doesn’t believe the income loss will deplete the entire fund.

“But that’s why you have a rainy-day fund,” Barnes said.

He said the board would have to further decide on the needs of the district as opposed to the wants.

“I believe we can satisfy our needs to educate kids without raising taxes, I really do,” Barnes said. “I do think the contingency fund is big enough to take care of any problems.”

He said, if elected, he would continue to push for complete tax relief for seniors over the age of 62.

The two athletic facilities approved for construction by TCSS at Troup and LaGrange High Schools have been a point of discussion for TRACER members in conversations about tax relief and the school board race.

The original price of both gymnasiums was estimated to cost $18 million.

However, after the increased costs of steel in 2018, the cost of both gyms almost doubled to $30 million.

“If you sign your name to something, you own it. Good or bad,” Barnes said.

He said he understands the buildings were paid for from SPLOST funds, but the maintenance of those buildings will still come from the general fund.

Blair said he thinks the situation was handled poorly from the beginning when it was presented four years ago.

“They over-promised, and they undervalued what it would cost,” he said of the board.

He said once the new members of the board were voted in, they had to keep the promise even though it would cost way more than initially planned.

“It wasn’t budget overrun as some claim. It was poor planning from the previous administration that our current board and administration have had to work through to deliver on what was promised,” Blair said.

The four races for the TCSS board feature three incumbents and one non-incumbent in Blair. The opponents of those individuals are all members of the TRACER group, including Barnes.

However, Blair said he thinks several of the goals are common between the two groups, even if there are different ways to get there.

“We all want the teachers to have all the things they need in the classroom and not have to pay for it themselves,” he said. “We just have different approaches to how to get there.”

Barnes also believes there can be middle ground found between individuals outside of the TRACER group.

He said he’s running as an individual, and just because he agrees with a particular group of individuals, he still stands on his own platform.

“I think everybody wants a school system where their students improve and learn. That’s the common ground, so how do we get there?” Barnes said. “I’m in this race for the people of District 2. Their will and their consent is important to me.”