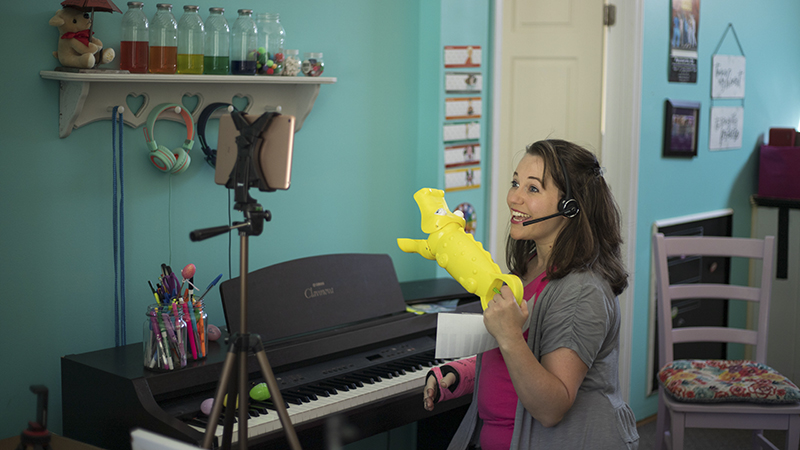 LaGrange Piano and More Studio Director Noelle Reed uses a toy as a teaching tool in one of her classes. — Jenna Oden

A local business owner who teaches music lessons has seen a 30 percent drop in enrollment since the COVID-19 pandemic hit Troup County. But piano teacher and studio director Noelle Reed said the studio has still been able to keep students by going to virtual lessons.

“We started talking about it at the end of January, through February making plans,” Reed said. “We had a vague plan on what we were going to do. Initially, nobody thought it was going to get that bad in Georgia, but all of a sudden, when they said school is out for two weeks, our recital was planned for the next weekend.”

Reed originally planned to close the studio for two weeks, credit the students during the closure and add extra weeks on at the end of the semester. 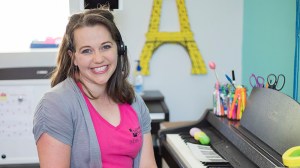 “Then, we saw that this could go on longer because that’s what some teachers in other countries had been saying,” Reed said. “That would have just been a really sad way to end the semester. It would be abrupt, and we love our jobs, we love teaching and we love our students. We decided to go ahead, and for those two weeks, try it online.”

When that first happened, though, Reed had no Wi-Fi at the studio and didn’t fully understand how to work all the equipment and software at first.

“We knew we had to continue services and not be an interruption for the kids because we love our students,” Reed said. “Our motto is to engage, excite and educate. Taking lessons at our studio, people always say it’s so much fun, and they say it’s not like the piano lessons they remember growing up.”

Reed said even though it was hard to translate the instruction online, they were able to do it and now teach all lessons on either Facetime or Zoom.

“The first couple of weeks and days were very emotional,” Reed said. “We lost a few students who lived in areas that didn’t have good internet or bandwidth. Or we had students who were a little older and had some struggle with the technology or it was a little overwhelming for them, so they are waiting for this to end. We had a few parents who just weren’t quite ready to make the switch, and that is fine. We know this is an overwhelming, emotional time for everybody.”

Reed said some days she or other teachers are in the studio working and teaching the lessons virtually or at home.

She added that she had to buy multiple items of equipment to be able to teach her students virtually, including headsets, tripods, tablets and more.

“Luckily, my husband works in IT, and they sent them all home about two weeks before everything happened,” Reed said. “My income was our supplemental income, and it has gone down, but thankfully we still have been able to pay for this location. We will be able to use the equipment when we come back thankfully. There’s a lot of really cool apps we can use to teach lessons.”

Reed said she decided not to apply for any small business loans.

“I decided at the end of the day I could do more to help my business than relying on the government,” Reed said. “We even thought about shutting down, but then we would have to build back up. It just made more sense to spend my time working on developing new programs for my students or advertising us.”

For more information about LaGrange Piano and More, visit lagrangepianolessons.com.