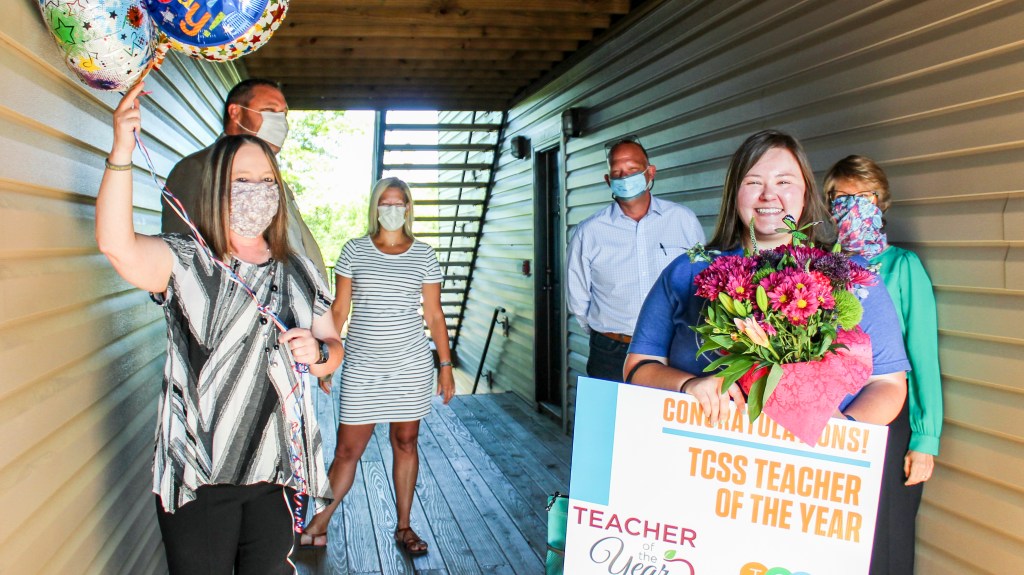 When Hannah Frady, Troup County High School government and history teacher, received a knock on her door Friday afternoon, she didn’t know what would come next.

After opening the door, she saw her principal Niki Watts, TCSS Superintendent Brian Shumate and other school system leaders to present her with the TCSS Teacher of the Year Award. She also received passes to Great Wolf Lodge, flowers, balloons, TCSS swag and the Teacher of the Year Bowl.

According to a news release, Frady said she’s proud to represent the system in a state competition, even though it is a year away. She will begin her tenure as TCSS teacher of the year in June 2021, which follows the state competition timeline.

Frady said it took her a moment to realize what was happening when she opened her door to see the superintendent and principal with flowers and balloons. However, she said once she realized it was the same group who surprised her in January at the school when she was nominated, she figured it out pretty quickly.

“I am so honored and humbled to have been chosen as the Troup County School System Teacher of the Year,” Frady said in a news release. “This is truly a great honor that I was not anticipating. I hope to live up to the standard of my predecessors and make Troup County proud. I cannot express enough gratitude to TCSS, my administration, my fellow teachers at THS and my wonderful students. I would not be here without them.”

Frady now moves on to compete in the statewide teacher of the year competition.

She participated in several local rounds of competition before obtaining the title of teacher of the year at TCSS.

First, she competed with her peers at Troup County High School, where she was voted the school teacher of the year.

Next, she completed essays that were anonymously read and scored by five community judges.

The results of those scorecards showed Frady rose to the top of the list. This process mimics the Georgia Department of Education Teacher of the Year program.

Frady said she relied on help from former teachers within the school district who have won county teacher of the year in the past.

She ran her essays by them for feedback.

“I feel like I will lean on them once again when it comes to the statewide competition,” she said.

In one of her essays, Frady wrote about her favorite teaching moment. It focused on a National History Day project, where she had her students research an aspect of history corresponding to the theme of ‘Breaking Barriers.’”

She connected with LaGrange College so students could use their library and learn research skills.

“This experience allowed me to guide my students in forging their own path of discovery,” she said.

Frady said while in the classroom she works to have an open relationship with students.

“I realize and understand that they have lives outside of the classroom, and there are things they need to do whether it is sport or something else,” she said.

“I try not to bombard them and understand when they are having a bad day or are excessively tired. I understand those days, and I have those days myself.”

She said building those relationships with students creates trust and an effectively academic environment in the classroom.

During COVID-19, she said the process has difficult for her and some of the students.

She said most of her days consists of calling and emailing students, as well as using Google Classroom.

“For the most part, that has worked, but I would prefer seeing my kids every day, so I know how to help them and know what I need to do,” Frady said.