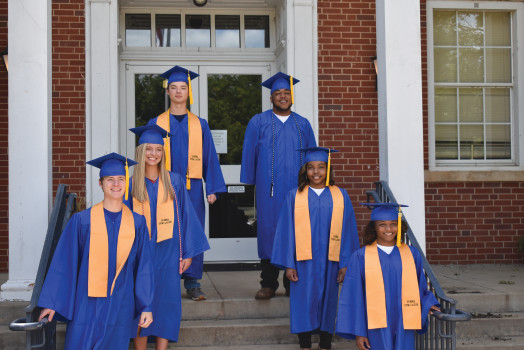 The odds of having triplets is 1 in 9,000 births. It is even rarer to have two sets of triplets graduating in the same class.

This is one of the facts that make the Valley High School class of 2020 even more unique.

On June 8, Jordan, Journey and Jakobe Caldwell and Madison, Will and Jared Bush will receive their diplomas in Ram Stadium.

“It has been a pleasure to work with both sets of triplets and their families,” Valley High School counselor Tolandra Harris said. “They are all great students who each had their own personality. There were some similarities and differences in both sets. But, overall they have been wonderful all four years that I have had an opportunity to work with them.”

The six students will graduate near the top of their class and have combined to earn more than $100,000 in scholarships.

“They are all in the top 25% of their graduating class. I am happy that I have been a part of their high school years,” Harris said. “Valley High School is my alma mater, so I am super excited that we are able to record this as a part of the history of our school. I am really sad to see them leave. However, I am also excited to see what the future holds for each of them.”

Whether it was playing on the baseball team, cheering, playing in the band or just being participating in various clubs, all six students were involved in various activities for the Rams in their four years.

Journey Caldwell and Madison Bush, both the oldest of their trio, met each other first when they were in the sixth grade.

“Every Friday night, we were able to be on the field together,” Jordan said.

Jared and Will Bush played baseball for the Rams in their four years in high school.

“You get to experience those moments with him,” Jared said about playing baseball with Will. “Right now, I don’t look at it as that big of a deal, but I’m sure 20 years from now, I’ll think of those memories. It was definitely worth it.”

Growing up with two other siblings that were going through everything together was key for both sets of triplets. It allowed a special bond to build between the two pairs.

“It’s different than anyone else. I wouldn’t know what it would be like to be a single child,” Will said. “It’s just different than anything I see with my friends. I feel bad for them because they’re lonely growing up, and I just couldn’t do that.”

The three Bush children are going their separate ways after graduation. Will plans to join the United States Marines and will leave in October. He plans to go into combat engineering. Jared is going to attend Southern Union and will move on to Auburn after his time there. Madison will attend the University of Alabama and will pursue her bachelor’s in nursing.

The Caldwells are sticking together. All three will attend the University of Alabama in Birmingham. Jordan and Journey will also pursue a bachelor’s in nursing, while Jakobe will go into Criminal Justice. He plans to be a drug enforcement agent after college.

Jordan and Journey will be roommates next year, which they said would make the college transition easier for them.

“I like the fact that we are staying together,” Journey said.