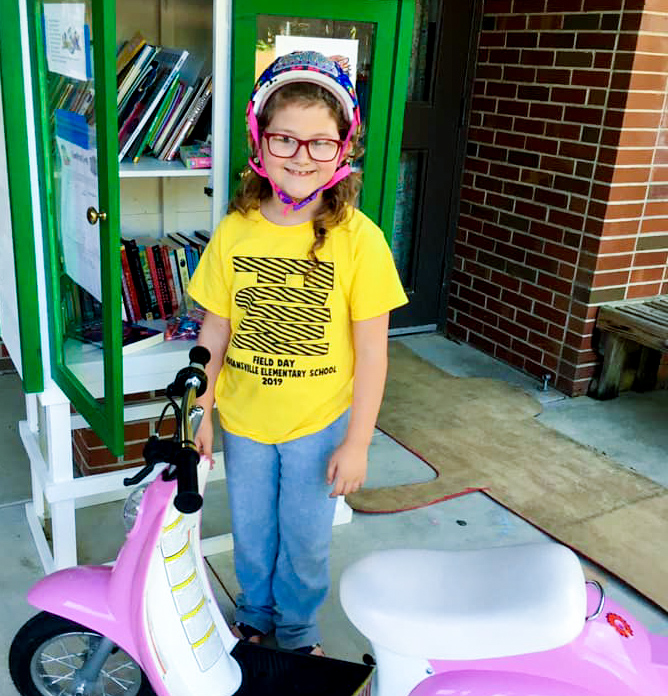 Hogansville Elementary student Lydia Lehigh get a book out of the little free library near the school. — Contributed photo

Hogansville Elementary has been awarded more than $90,000 from the Georgia Department of Education as part of the state’s efforts to shore up digital learning infrastructure during the COVID-19 pandemic.

The Troup County School System announced the elementary school would use the grant money to purchase Chromebook devices for students, a new learning management system for a better online experience and training for both teachers and students. At the May 14 TCSS Board of Education meeting, the board approved the purchase of 150 touchscreen Chromebooks for $55,447.50.

Assistant Superintendent Penny Johnson said the elementary school was able to apply for this grant based on its status as a Promise School, which are considered some of the lowest-performing schools in the state. Johnson said although Hogansville has shown some of the greatest gains in testing, the state looks at the past three years of data for the Promise School distinction.

Johnson said that the district would be looking at hotspots throughout the county with the grant, but it will also have to look further because she said some students in rural Troup County don’t have any connectivity.

“Basically, it is to support students in rural areas who do not have resources,” she said.

Johnson said the district could look at a combined approach between creating hotspots on bus routes and hotspots students can take home. She said another method could be loading academic resources on a flash drive and giving them to students, so internet access isn’t required.

“This grant is really to serve as a pilot for us, and we are going to get some valuable information from the purchases that we’re going to make,” Johnson said.

In all, the state gave out more than $21 million to 55 school districts.

Gina Turner, Hogansville Elementary principal, said the grant would provide the school the opportunity to stay connected to students and families academically and socially.

“We have had learning participation since our March 13 closure, but most of that was completed through paper and pencil,” Turner said in a news release. “As families came to collect food, they expressed the desire to have a device — besides a telephone — to do the work on Google Classroom. Some also expressed a concern about the lack of connectivity. This grant will help with both of these issues.”

Georgia School Superintendent Richard Woods said the “digital divide” is not a new issue in Georgia, but the COVID-19 pandemic has made it more apparent.

“School districts have done incredible work during the COVID-19 school closures and have been hard-working, creative, and thoughtful with the resources they have,” he said in a news release. “But there is still a need for better digital learning infrastructure within our state, particularly in rural and underserved communities. These funds will help districts strengthen their digital learning capacity, extend summer learning opportunities, and ensure no student is left unconnected.”