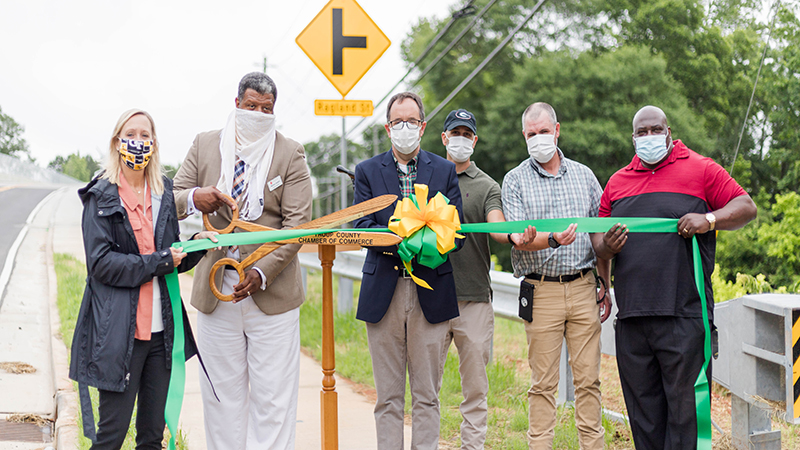 The city of LaGrange celebrated the opening of the Greenville Street Bridge with an official ribbon cutting Wednesday morning.

“We are so excited that this project has come to conclusion,” Thornton said. “There are lots of people to thank for getting us here. It has been a challenging few years to get this project brought to fruition, but we are delighted that it is finally open for traffic.”

The Georgia Department of Transportation awarded the bridge contract to C.W. Matthews Contracting Company in 2018 at a cost of $8.9 million. According to the C.W. Matthews website, the bridge is 81 years old.

“This is a big project for the city of LaGrange, the county, for the DOT and for all the partners who have been involved with it,” Thornton said. “We felt it fitting to have a formal ribbon cutting, a formal ceremony to denote that the Greenville Street Bridge is complete. It is open for traffic and once again a part of the traffic system here for the city and the county.”

Thornton said the bridge had been closed by GDOT on Feb. 10, 2016, due to safety issues. “Anytime you have to build a bridge, it’s expensive and complicated, but when you’re crossing over a railroad that adds additional complexity to it,” Thornton said. “We’re very grateful to the leadership of the Department Transportation for their support of everything that they do here in LaGrange and Troup County, but particularly today, the Greenville Street project.”

The bridge was expected to open in late of 2019, but due to unforeseen issues with building the bridge did not open until the beginning of May.

“But we’re delighted with the final product,” Thornton said. “I think they really did a wonderful job, constructing this bridge. Troup County as part of this bridge reconstruction project, paved this section of Greenville Street from the Horace King Bridge to all the way out here to this bridge and beyond.”

Penny Brooks, communications director for GDOT District 3, which includes Troup County, said in a previous interview that GDOT is responsible for the maintenance on the bridge. She said at the time that the construction work was still continuing in the area to finish up the final portions of the project.