Community, police have discussion about racism 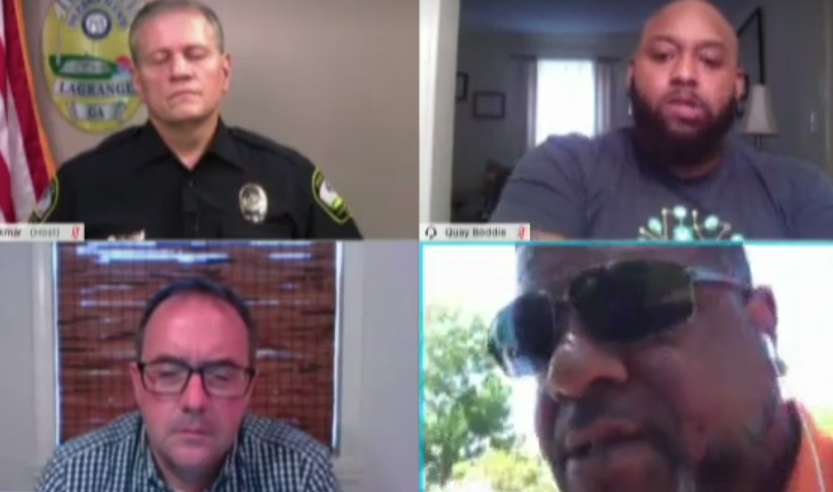 Above is a screenshot of community and police leaders discussion police interactions and racism in the community.

Several community leaders and residents participated in a community forum Monday morning to discuss actions against racism and police partnerships within the community.

The nearly two-hour discussion is available for viewing on Facebook Live on the city of LaGrange’s Facebook page and the LaGrange TV page.

Thornton said at the beginning of the discussion that he was there to listen and not make comments. However, he opened the conversation by saying that while COVID-19 has taken its toll on the United States in 2020, another disease is still plaguing the country.

“That disease, of course, is racism,” he said. “We all see it’s there. We’ve experienced and even participated in it in various ways. And just when we think we are making progress, another hotspot emerges.”

The mayor mentioned the recent victims who have been killed across the country that have received high-profile media attention. There was recently George Floyd, who died on May 25 during an altercation with a white police officer in Minneapolis, Minnesota.

The officer, Derek Chauvin, kneeled on Floyd’s neck for more than eight minutes after being restrained by handcuffs. The officer has since been charged with third-degree murder and second-degree manslaughter. Those charges were filed on May 29.

The other victims include Breonna Taylor, who was killed during a Louisville Police Department drug raid at her home in Louisville and shot eight times on March 13. According to media reports, the officers were conducting a “no-knock” warrant, meaning they didn’t have to knock or identify themselves as officers. When they entered the building, Taylor’s boyfriend used his legally-owned firearm to fire at officers after they used a battering ram to knock down the door, striking an officer in the leg. Media reports say the officers then shot more than 20 shots into Taylor’s apartment, hitting her eight times. According to a statement by the Louisville FBI, an FBI investigation has been launched into the officers’ actions that day.

On Feb. 23, Ahmaud Abery, a 25-year-old man, was shot by two white men while running in a Glynn County neighborhood. According to the police reports, on May 21, Gregory McMichael and his son Travis McMichael, have been charged with murder and aggravated assault. Media reports say the two white men allegedly felt Abery matched the description of a man who was suspected in several break-ins to the area and chased him through the neighborhood. After a struggle between Abery and one of the men, police reports say Travis McMichael fired fatal shots at Abery.

On Monday, Gaskin said the forum was long overdue, and the plight of black men isn’t addressed enough.

“We live with the knowledge as a black man knowing that at any given time, you know life can be taken out for little or no reason,” he said.

Most of the discussion centered around the call for action and policies that will adequately address systemic racism in LaGrange and Troup County.

Ward said black men and women want a set of rules that apply to everybody when it comes to social issues in the community, something he says right now isn’t the case. He said community leaders will say one thing to white residents and then something different to black residents.

“It’s not great or good to say you are not a racist,” Ward said. “But are you anti-racist? That’s what I want to hear.”

Another portion of the conversation highlighted that part of the reason people in authority are forced to take action is that video evidence makes it impossible not to act on cases.

Dekmar said when he came to the LaGrange Police Department in 1995, there were no videos and after speaking with the community, he conducted more than 50 internal investigations. He said most of those investigations went against the officer because he can force them to answer questions the legal system cannot, or the officer could be terminated.

“The problem, in my opinion, isn’t the lack of video,” Dekmar said. “The problem is a lack of leadership and accountability in many of these police departments that we see the problems.”

He said the internal affair system is just one of many things that are dysfunctional in the agency.

“And as a result, because there’s no standard in terms of holding people accountable, you end up with these awful scenarios that, unfortunately, everybody in the profession pays for, and I’m as frustrated by them as anyone,” Dekmar said.

Gaskin suggested implementing programs to make sure the needs of the black community are met.

about the community,” he said.

Gaskin said the police department is improving, but if it’s not for visual evidence, leaders in the criminal justice system will take the word of a police officer over the word of a black man.

Dekmar pushed back on the idea of his department not caring about the community, adding that his department hasn’t had a fatal police shooting involving a black person in 25 years. He said the department made more than 4,000 arrests in 2019 with just 29 uses of force.

Additionally, he said he’d overseen about 65 homicides with about 90 percent of those being black individuals, and the police department has about a 90 percent clearance rate in solving those cases.

Cotton challenged the population to get out and vote to see the leaders that represent them in charge. She also encouraged police officers to walk the neighborhoods, knock on doors and introduce themselves to young people.“Let them see who you are and that you’re just here to protect and serve,” he said. 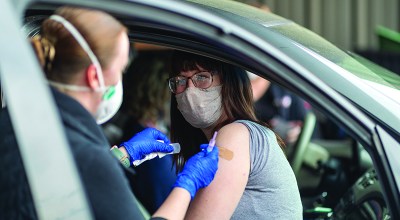 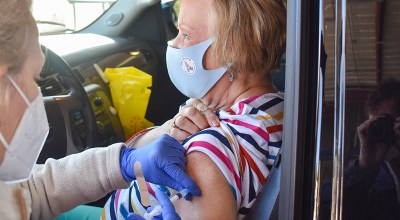 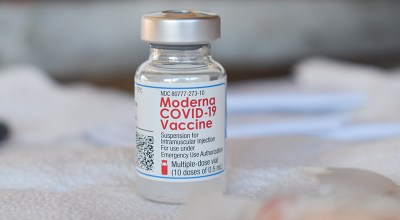 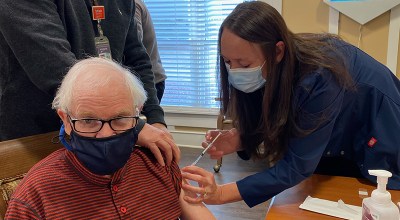 LaGrange to team with Red Cross for blood drive