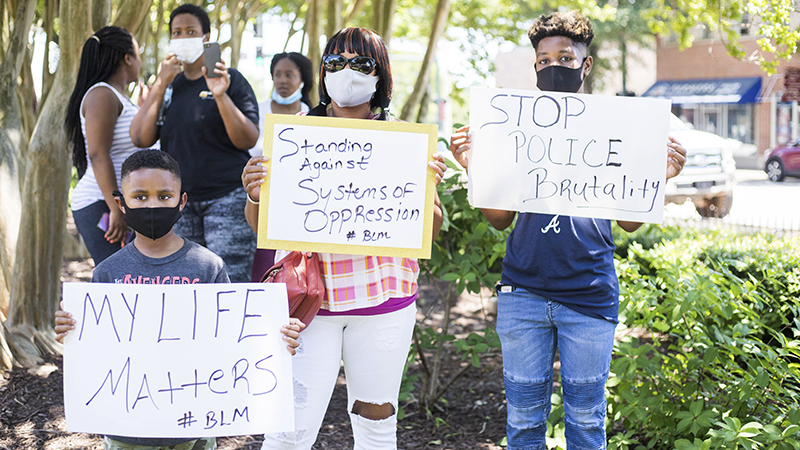 A family of three hold signs during a protest of police brutality and systemic racism against the black population in America on Sunday at Lafayette Square in LaGrange. — Jenna Oden

Like many of you, I spent part of my weekend watching television as protestors around the country marched in response to the death of George Floyd in Minneapolis, Minnesota.

We have seen similar demonstrations and protests in different cases where a police officers’ use of excessive force resulted in the death of a black man, but this one feels different. In this case, I am not sure I could find five people in a room of 100 who would defend police officer Derek Chauvin’s actions. I am not sure I could even find one. Put simply, Floyd should not have died, and there is no excuse for what happened.

With that said, it is also unfortunate that looting, rioting and burning of vehicles has overshadowed the message of protesters. It makes everyone involved look bad. I believe the majority of protestors are peacefully protesting and following curfews while also making sure their voice is heard.

A good example was Sunday in LaGrange.

We got word Saturday night that a protest was likely going to take place Sunday afternoon at LaFayette Square, so I contacted our reporting staff, and we began making a plan to cover it based on the information we had. By the time I woke up Sunday morning, I had been sent a couple of Facebook posts in which someone had posted publicly that people should avoid LaGrange and there were plans for rioting downtown.

I am puzzled about these social media rumors.  You should be, too, and you should be skeptical as you read and consider them.

We had two people at the square on Sunday to cover a peaceful protest that ended up including about 50 people of different ages and races. We streamed it live on our Facebook page, and it is available for anyone who would like watch it.

I think organizer Beth Jackson used the word “peaceful” at least 10 times when speaking. She said they had even notified the LPD that they were going to be on the square.

There were LaGrange police officers all over downtown, but they were not in riot gear and waiting to toss tear gas. Instead, several of the officers spent time talking to the protestors. Police Chief Lou Dekmar was also there, listening intently and shaking hands.

And then, on Monday, Dekmar, Mayor Jim Thornton, and leaders in the African American community participated in a two-hour forum on Facebook Live, where they discussed the current state of policing in our community, among other topics. That talk at times touched on some tough-to-discuss topics, which shows our city’s leadership is not afraid to feel a little uncomfortable to make sure any race issues are out in the open and discussed in a safe and productive format.

On top of that, Dekmar wrote a column in our newspaper on Saturday about Floyd’s death, calling the actions of law enforcement “reprehensible.”

This is the same community that in 2017 gathered to apologize for the death of Austin Callaway, a black man pulled from a jail cell and killed by a group of men in 1940. Back then, the police department reportedly did not do anything to stop them, and there was no investigation into the death. During the apology, LaGrange made national news as the community came together to recognize its missteps and move forward.

On top of that, the Racial Trustbuilding Initiative, which was formed in 2014, is bringing people together to work through race differences in our community.

Am I saying there are no race issues in LaGrange? Absolutely not.

For instance, Dekmar mentioned during a roundtable Monday the difficulty in finding black police officers. But its not just police work. We just finished accepting nominations for our 20 Under 40 magazine, which recognizes young adults who are making a major impact on our community, and out of the 250-plus nominees, a high percentage are white men and women.

The final list of nominations is not the representation of our community that we hoped for as we know from being active in our community there are many, many, African American men and women under the age of 40 who are excelling at their work in and for our community.

The truth is that race relations are probably always going to be a delicate topic. We are all from different backgrounds and have different experiences.

With that said, it is clear conversations are being had in our community that are not being held everywhere. And that is what is important, especially right now, where people with different backgrounds, different lifestyles and different skin tones need to lend an ear, listen to one another and embrace our differences to create a fairer and more inclusive world for all.

George Floyd is not a police training issue