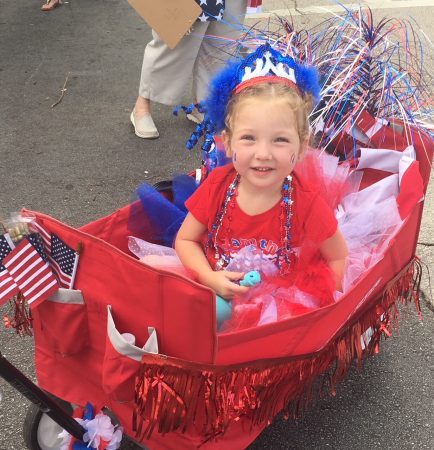 The Sweet Land of Liberty youth parade, a July 4 tradition in LaGrange since 1985, is going virtual this year.

Parade chairman Amanda Trask of Junior Service League, which sponsors and stages the parade, said the decision to move online was made with regret after it became clear the large public gathering could not be held within state-mandated social distancing guidelines due to the ongoing COVID-19 pandemic.

The theme for the 36th annual parade is “Star Spangled Everything.”

“The event will honor all our ‘community stars,’ who are working on the front lines during the pandemic,” Trask said. “Obviously, that includes health care workers and first responders, but children also might choose to salute grocery workers, truckers and delivery personnel, sanitation workers, food preparers or others who have continued to serve the community during this unprecedented health crisis.”

The theme, Trask said, is a nod to the national anthem.

“The Star-Spangled Banner always comes to mind when we think of patriotism, and is something children are familiar with,” she said. “We thought it would be fun for them to play off the idea of stars as they creatively salute community heroes.”

To participate, children or family members can post photos or videos to the JSL Virtual Fourth of July Parade Facebook event page by June 28. All entries will be assembled into a “virtual parade” for broadcast on the city of LaGrange’s website on July 4 at 10 a.m., which is the traditional parade time.

Judges will award cash prizes of $300 for the grand prize, $200 for first, $150 for second and $100 for third. The prizes will be based on creativity in decorations and costumes interpreting the theme. Winners will be announced at the end of the video.

Parade traditions like the Pat on the Back awards for fifth and sixth graders and recognition of outstanding graduates from the Class of 2020 at local high schools will also continue virtually.

“Nobody wants to have the parade more than Junior Service League,” JSL President Nicole Spivey said. “We have been supporting or sponsoring the parade since it was founded by League member Annette Boyd in 1985. Since having the traditional parade is not a viable option this year, we believe strongly that having a virtual event is more appropriate than doing nothing.”

One of Boyd’s goals in establishing the parade was to allow parents to teach and model patriotism to their children, Trask said.

“The virtual parade, while not ideal, will allow us to preserve that important goal and give families something positive to focus on, not just on July 4 but in the weeks leading up to the holiday as they brainstorm and create their entries,” she said. “Plans for a traditional 2021 parade are already taking shape, and we encourage those uncomfortable with the virtual event to join us on the square as we celebrate America next year.”